What’s cooking in the Indian-Saudi pot? 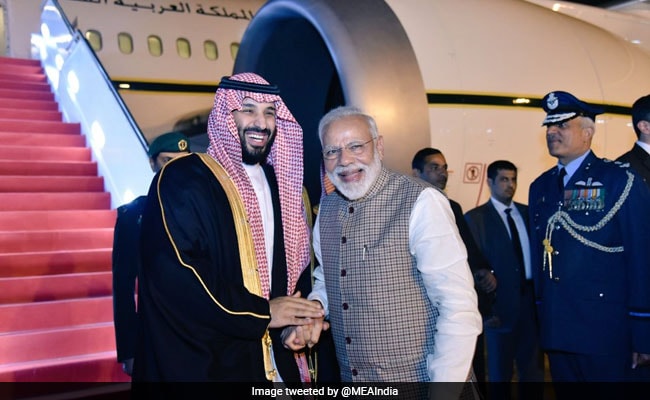 The one — some may argue — the only bit of Prime Minister Narendra Modi’s foreign policy that managed depart form the expected was his gambit in courting Saudi Arabia and the Gulf states. What’s not clear is the game plan or the thinking behind these moves. True, this approach has achieved several things: It has firmed up the Saudi source of energy and, with Riyadh leading the Arab pack in the Gulf, also lessened the psychological distance between Delhi and the Sauds on the one hand, and on the other, encouraged the Gulf states (known in the colonial era as the Trucial states) to be unusually helpful when it comes, for instance, to handing over to India Indian nationals who sought safe haven in these parts after committing crimes or being complicit in acts of terror and find the host nations, to their alarm, ready to hand them over to Indian authorities. Further, Modi’s personal success with the Sauds and the Gulf emirs and Sheikhs also strengthens the India-Gulf economic connection in terms of improving the prospects of these countries importing skilled and semi-skilled Indian labour and strengthening the flow of remittances that are propping up the economies of several Indian states, particularly Kerala, UP, and Bihar. Just Saudi Arabia accounts for some $12 billion in remittances, and together with the Gulf nations, make up for the bulk of around $70 billion sent home by Indian workers.

These secular strands of a bilateral relationship with Saudi Arabia contrasts sharply with the ties of shared religion, Islam, and strategic security cooperation strongly hinted at in the reports of long standing about the Pakistani A-Bomb being at Riyadh’s disposal if the latter ever finds itself in dire military straits — a quid pro quo for the Saudis generously funding Pakistan’s sourcing its  “Islamic Bomb” and missile programmes from China starting in the mid-1970s. General Zia ul-Haq, it may be recalled, as Brigadier led the Pakistan army-manned Palace Guard for the Saud Family in Riyadh. This arrangement of personal protection may still be active. It is for a reason that Pak COAS General Qamar Bajwa’s immediate predecessor, Gen. Raheel Sharif, post-retirement, accepted the offer to lead the army of Islamic states that the ruling Saudis dreamed up. It is another matter, that Gen-Raheel has no actual army to run!

This is the context in which Modi tried to get some traction on the Pulwama attack by getting however distant an acknowledgement by Mohammad bin Sultan (MbS) of a Pakistani hand in the suicide bomber attack on the CRPF personnel. This was plainly a fool’s errand because the almost Saudi supremo had already made clear during the Pakistan leg of his trip that he was happy to consolidate the Saudi stake in Pakistan by economically rescuing it from imminent bankruptcy with an emergency injection of $20 billion, something Washington cannot any more afford to do. But this Saudi action has the Trump Administration’s support because Riyadh’s willingness to financially help out Islamabad also acts as a brake against the Imran Khan regime sliding helplessly into Beijing’s strategic lap and economic servitude, courtesy CPEC.

Hence, Washington’s publicly siding with India in calling for branding Azhar Masood, the Jaish-e-Mohammad emir,  as a terrorist under the UN aegis doesn’t really impose a cost in terms of an alienated Islamabad which would hurt the US plan for a face saving getaway for its forces out of Afghanistan. This last is all that the US Special Representative Zalmay Khalilzad is interested in securing from the Afghan Taliban. All the American talk of achieving regional peace, etc. being so much smokescreen for US’ real intent. In the event, Washington relies on China to veto the “Masood terrorist” campaign mounted by Delhi even as America pleases Modi by seemingly being on India’s side. Clever.

Whether or not Modi has a larger foreign policy scheme or not for West Asia in being effusive in his welcome, MbS certainly does. For one thing he is embarked on cleaning up his act after his role in the killing in the Saudi consulate in Istanbul of the Washington Post columnist Adnan Khashoggi was revealed by the Tayyip Erdogan government. Erdogan wants Turkey to displace Saudi Arabia as the putative head of the sunni bloc of Islamic countries. The situation is piquant — Saudis have the oil and money to buy allegiance; Ankara has the nous of a modern nation-state which also boasts of technological and military proficiency. Erdogan last year visited Delhi, part of his agenda being to polish Turkey’s image with the subcontinental Muslim community, by offering his good offices as a mediator on Kashmir. MbS has come avisiting with exactly the same mission as peace-maker on Kashmir between India and Pakistan that he spelled out in Islamabad. The chances of Riyadh being so accommodated by Delhi is minus-zero but the optics for MbS in Pakistan were too good to pass up. In India, the visiting Saudi leader no doubt cagily brought up the possibility of his being the honest broker with Modi, which met the same fate as the Indian PM’s effort to persuade him of the Pakistani hand in the Pulwama incident. So, it was a wash, with both parties refusing to make an issue of the other side not agreeing with its position.

But MbS has still another angle in mind. Ramping up the imagery of closeness to India — manifested in much hugging and embracing — Modi’s diplomatic innovation helps Riyadh  in the Islamic world if India, with the second largest Muslim population after Indonesia and, in a few short years, headed to be the largest Muslim nation in the world, is seen to be on its side not only in the competition with Erdogan and Turkey for leadership, but in the more significant sunni-shia tussle underway with Iran for influence in, and control of, West Asia.

This is the quick sand India has every chance of getting sucked into because whatever the level of security and strategic cooperation with Saudi Arabia and the Gulf nations, it pales before the potential that Iran holds out. Iran,  through Chabahar, is the gateway to Afghanistan and Central Asia and, as I have argued, is one end of a naval pincer that can not only close in on Pakistan’s Gwadar but also the Chinese navy operating out of Gwadar and ex-Djibouti, making China’s maritime presence in western Arabian Sea tenuous (especially if PLAN is also denied access to Humbantota in crisis – a Chinese Company’s 99-year lease notwithstanding). Indeed, Iran’s strategic importance to India matches Vietnam’s and, hence, Modi will have to be careful of not getting India embroiled in a US-backed Saudi struggle with Iran.

The more troubling aspect of MbS’s reach to Modi and India and his clucking hypocritically in sympathy about the perils of terrorism is that Saudi Arabia has single-handedly birthed and grown the extremist wahabbi menace over the last 40 years that  has mutated into the hideous Islamic State. IS, according to news reports, is fighting its last in its stronghold of Mosul in Iraq. This may actually, however, be the beginning of a massive internal security problem for India — the Pulwama attack by a radicalised local Kashmiri being but a warning sign. One can expect ISI to quickly exploit the opening so provided by funneling beaten Islamic State stalwarts hailing from Central Asia and other proximal areas, into joining Jaish and Lashkar and fighting the kafir with the aim of setting up the ambitious caliphate in a less trying milieu than Syria and the Levant. All things considered, it is unlikely Mohammad bin Sultan will mind such a denouement.

6 Responses to What’s cooking in the Indian-Saudi pot?