Another foolish China-siding gesture in the works? 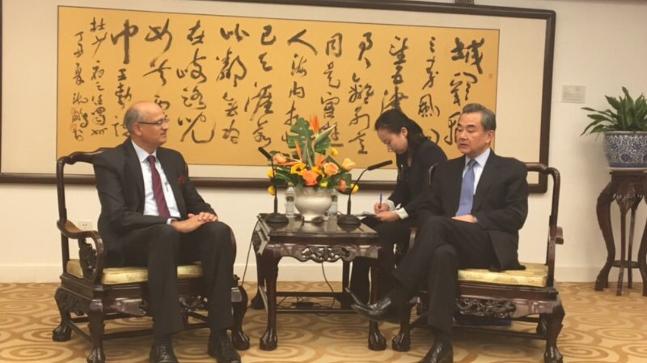 President Donald Trump has announced a general military withdrawal of US military forces from various locations, in the main, Iraq and Afghanistan. These two countries are semi- permanently destabilized, turned into perennial hot spots-cum-enduring sources of worry for countries in the vicinity owing to the original, ill-advised, armed American intervention. So, the US scooting out of trouble they created for themselves and the world is not new, having done it first in Vietnam  and, in this Century, in Iraq and Afghanistan — in each case being bloodied by hard-charging denizens of these states who felt hard done by the Americans and decided to act.

The people most allergic to foreign dictation are, of course, the Vietnamese and the Afghans — the latter a particularly nettlesome lot and, in the modern era, the only Asians not to be conquered and colonized by the West. So when the Americans with their crass over-confidence chose to  go punitive and hunt for the al-Qaeda leaders in the hills and remove the Taliban regime in Afghanistan that hosted them after 9/11, it was only a matter of time before they were served their just desserts. After spending $50 billion annually for the last 17 years for a total of some $850 billion  — in excess of trillion $ actually if the costs of the prep, etc are counted — an exhausted US is hightailing it back to CONUS, letting Kabul and the rest of that country slip back to the Taliban. So much for going nowhere fast and losing  a fortune in the bargain — just the sort of deal Afghans have time and again imposed on intruders.

What the US Special Envoy Zalmay Khalilzad is negotiating with the Taliban is plain: a fig-leaf for an American military pullout. He may not get it. The Taliban who sense power once again in their grasp have rejected out of hand Washington’s suggestion of peace talks involving all Afghan parties, and vetoed sitting across the table with the Ashraf Ghani government reps considered by them as American puppets. Indeed, the growing irrelevance of the Ghani regime is reflected in the report of  the Special Investigator General for Afghan Reconstruction, which the Pakistani press reports as revealing the tenuous hold of the US-assisted Kabul government. It controls only 219 of Afghanistan’s 407 districts, or 54 % of the territory. This claim is however refuted by independent sources who say the Afghan security forces securely control only 35% of the country, of the rest 12% is controlled by the Taliban and 34% is contested ground.

After six days of hard negotiations (January 21-26)  in Doha from which the Ghani government was excluded on Taliban’s say-so, two things are clear. One, that no deal was hammered out, nor is any on the horizon. And secondly that the Taliban are divided between the hardliners who are willing to talk and the extremists who believe the consolidation of jihad and the spirit of the fighting cadres will suffer by merely interacting with US. While the former are keen to hasten American departure by hammering out a face-saving way out for Washington, the latter more dominant school are convinced US troops will, in any case, leave before Trump gets into the 2020 presidential election cycle and, therefore, no concession need be made to the US, in which event, Kabul will fall into its lap like a plum.

All the stuff about Khalilzad and the Taliban coming to an understanding about a ceasefire followed by a coalition government to run the country, and the US being allowed to retain a small force in Afghanistan is a lot of diplomatic hoo-ha.  Afghans are no damn fools when deal with Americans who they see as intent on cutting and running.

The Ghani government was also kept out of the soiree in Moscow of Afghan leaders from various factions — the Northern Alliance leaders Atta Mohammad Noor, Yunus Qanuni, Mohaqiq, a collection of Pathans, such as former president Hamid Karzai, Hanif Atmar and Syed Hamid Gilani, and a Taliban team headed by Sher Mohammad Abbas Stanakzai. This Meet too, other than showing a Russian hand in the pot, achieved little.

The Modi dispensation, as ever dependent on Washington to do its hard work, was taken aback by Trump’s decision to get the US forces out at any cost because, apparently, it isn’t aware that America is already humiliated, its vaunted Special Forces-led effort proving no match for the Taliban. But more, Modi, Doval and Co., seem unable to grasp the simple truth that there’s no fight left in the Americans and Trump is not one — as he has proved — to fight a war for another country’s sake, least of all India which he views as a contemptibly weak country he can jerk around at any time. Like on H1B visa and “chain immigration” issues.

In this context, Delhi’s interest has been defined at a pollyanna-ish level for consumption by the West as the need to safeguard the infrastructure built by Indian engineers with Indian money and the ongoing investment in other development projects — all worth more than $3 billon, and its policy of doing good by the Afghan people. The dark side of India’s apprehensions has, however, to do with “Islamic inclusivism” but in an emirate that the Taliban have offered as a sop. What it means is anyone’s guess. However, the return of Taliban rule it is feared would have battle-hardened Taliban fighters, the various Lashkars in Pakistan preoccupied with  Kashmir, Islamic State remnants streaming back from the Syrian war zone, and activated IS sleeper cells, all  relying on Pakistan’s tested infrastructure to support  terrorism, combining to  realize the longstanding Islamic fantasy of Ghuzwatul-Hind — a prophecy of the Islamic conquest of Hindustan that finds repeated mention in the Hadith.

Except, this madcap notion exactly overlays the extremist Hindu fear and dislike of Muslims that the RSS ideology reflects, and which fuels the paranoia and over the past five years has led Modi repeatedly to spurn peace initiatives by Pakistan, most recently by Prime Minister Imran Khan.  If Imran, like earlier Pakistani PMs, dutifully talks about “atrocities” in “Indian-occupied Kashmir”, why is it surprising? But, equally, both he and the Man who really matters in that country, General Qamar Bajwa are one in hinting that such ejaculations should be taken as the usual wallpaper — an inert aspect — of Indo-Pak diplomacy  and ought not to prevent the two sides from talking formally to each other. Common sense, which is generally missing in our foreign policy, would suggest that talks, any kind of formal or even back-channel dialogue, is more likely to incentivize Islamabad and, depending on the stakes created by these talks and actions Delhi could mount in support of them, motivate it to clamp down on the jihadis, than if Modi carried on as he has done.

So instead of working with Islamabad to put a lid on potential Islamist troublemakers that the Imran regime is wary about, what the Modi government is contemplating is partnering China in containing the Afghanistan problem. It is a policy balloon the MEA has put out to see if it flies. Is working with China the answer, considering Beijing has remorselessly reduced India into a nonentity in the subcontinent, and shrunk its vestigial influence in the extended region in every possible way? Who’s the source of such damn fool ideas?

It is not hard to surmise that it comes from the Chinese-speaking quarter of the Ministry. These diplomats who have spent long years in China or on the China watch, like their counterparts in other countries are mesmerized by the zhanguo — “the central kingdom” to a point where they become Beijing’s apologists, promoters of the Chinese perspective, and even protectors of China’s interests to the detriment of that of their home country. We have such a  mandarin, Vijay Gokahle, heading the Foreign Office. On what basis does Gokhale think the interests of India and China converge on any thing, and Afghanistan in particular? Beijing would rather have Pakistan in the driver’s seat. Does that suit Messrs Modi and Doval?

India has the choice to get together with Imran-Bajwa’s Pakistan and the Afghan disputants and, using diplomatic finesse, get the US, Russia and China out of the huddle and, progressively, out of the game. Because of its anti-Pakistan prejudice Modi will obviously reject this option. Or, it can be the spoiler, injecting India forcefully into the Afghan mix by channeling a lot of monies and war materiel to trusted friends in the Northern Alliance and to certain sections of the Afghan Taliban and Pakistani Taliban Delhi has long cultivated, and otherwise to emerge as a party every side wants not to muck around and mess up things for everybody. It is the sort of disruptive role Modi has shown he has no imagination to conceive or stomach to implement.

So the third safe, passive, option of doing nothing beckons and is what Modi will choose: India, as always, will squirm on the sidelines, ride on the American military bandwagon as far as it will go, then jump off and clamber on to the Chinese jalopy. Except, the road the last will take is the CPEC.

Senior Fellow in National Security Studies at the Centre for Policy Research, New Delhi, he was Member of the (1st) National Security Advisory Board and the Nuclear Doctrine-drafting Group, and author, among other books of, 'Nuclear Weapons and Indian Security: The Realist Foundations of Strategy', 'India's Nuclear Policy' and most recently, 'Why India is Not a Great Power (Yet)'. Educated at the University of California (undergrad and grad), he was Visiting Scholar at Princeton University, University of Pennsylvania, the Shanghai Institutes of International Studies, and Henry L. Stimson Center, Washington, DC.
View all posts by Bharat Karnad →
This entry was posted in Afghanistan. Bookmark the permalink.

7 Responses to Another foolish China-siding gesture in the works?