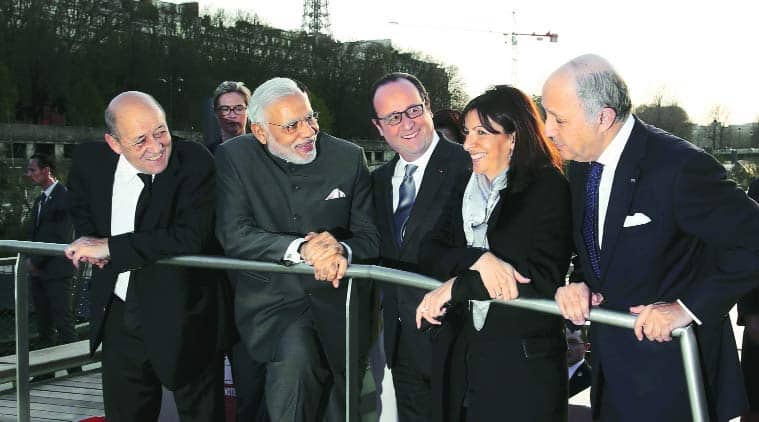 On April 17, 2015 — some 11 days after Modi had made the surprise announcement in Paris when on a state visit about his government’s purchase of 36 Rafales, the French combat aircraft, an op-ed of mine published in The New Indian Express titled “Impatience seals worst possible defence deal” (http://www.newindianexpress.com/columns/Impatience-Seals-Worst-Possible-Defence-Deal/2015/04/17/article2767483.ece ), was the first article in the Indian press critical of this transaction, one that foresaw the political squall the BJP regime was heading into.  (This piece was also posted on this blog — https://bharatkarnad.com/2015/04/17/impatience-seals-worst-possible-defence-deal/

In the first few paras of that piece I said about this prime ministerial initiative that it “was portrayed as Modi’s ‘out of the box’ solution for a problem that didn’t really exist. Plainly, he mistook the hard, extended, bargaining between the two sides as evidence of red tape, and cutting it as his unique achievement. But impatience is a liability in international relations and can cost the country plenty. Rather than pressuring French president Francois Hollande and the French aviation major, Dassault, which is in dire straits and was in no position to resist sustained Indian pressure to deliver the Rafale and the technologies involved in toto to India, Modi eased off, promising a munificent $5billion-$8 billion for 36 Rafales off the shelf minus any reference to the L1 (lowest cost) MMRCA tender offer, possibly a buy of another 30 of them, and no onerous technology transfer obligation. It is a turn that must have astonished Hollande and Dassault with its exceptional generosity….” and concluded, prophetically, that “Previous prime ministers have been victimised by bad advice, and paid the political price, for instance, Rajiv Gandhi with regard to the Bofors gun. Modi will have to carry the can for this Rafale transaction—a boondoggle in the making. With the opposition parties …waking up to its potential to politically hamstring the BJP government and mar Modi’s prospects, anything can happen.” It also mentioned how the then defence minister Manohar Parrikar, favouring the speedy, economical, enlargement of the Su-30 fleet to meet the urgent requirements of IAF, was blindsided by the Modi decision. I repeatedly  warned of a brewing political storm over Rafale in my writings and in the posts on this blog, ever since.

That day of reckoning has arrived.

Whether Modi manages to rides out this crisis is besides the point; that he cannot and will not escape the taint is certain. What is making it progressively difficult for the Modi dispensation to explain away a plainly flawed approach to military procurement by the PM taking the matter into his own hands and bypassing the established processes is that it has left a paper trail. The PM, in his capacity, can call in the Defence Secretary and instruct him to accelerate the acquisition process. But that’s a fry cry from his intervening forcefully at the price negotiation stage to, in effect, have his own representative — in this case the NSA, Ajit Doval, set up a separate negotiating track, which is absolutely barred by the settled “rules of business” of the GOI. The Prime Minister was bound to pay a political price.

When bureaucrats in the decision loop are bypassed for any reason by the political poohbahs, they usually make sure to not end up becoming the fall guys. The remarkable thing is that it took so long — nearly four years — for the dam to burst, document drip at a a time. Considering that so many MoD officials were involved in the price negotiation committee over the years, all of them no doubt squirreled away copies of potentially “hot” files for just such an occasion as has now come to pass. Copies of the most sensitive documents are a safeguard, evidence to absolve themselves of any responsibility for things going wrong, as has happened re: the Rafale. Many of these dissenting officials, incidentally, were abruptly posted out of MoD not too long ago, which added to the general discontentment of the babus in the govt at-large and in the Defence Ministry in particular  with Modi and his way of doing things.  This to say that it was only a matter of time before these documents were “leaked” to the press.

But why at this time? Babus, in their careers, develop very sensitive antennae. With Rahul Gandhi’s charge of corruption getting the traction it has — something the ruling BJP did not anticipate, the bureaucratic ill will towards Modi oiled the predisposition of those having the precious information about what really occurred to make the notings available to media persons. N. Ram, owner and sometime editor of the Leftist ‘The Hindu’ newspaper, and a longstanding “Cadillac communist” was the perfect vehicle for such leakage, because it segued in with the “mahagatbandhan” the numerous “socialist”-minded political parties are putting together to take on the BJP in the coming general elections.

The entire tranche of files and related documents on the Rafale deal have apparently been handed over to Ram. This is obvious from the numerous hints in Ram’s two Hindu stories to-date — the one featured in today’s edition being more damaging because it provides evidence of PM-run parlays with the Elysee Palace, which seemed more intent on  accommodating the French government and aviation major, Dassault Avions, than in chiseling away at the humungous price tag for the total Rafale transaction.

Worse, for Modi, this revelation contradicts his government’s case before the Supreme Court that the latter had been given all the information about the Rafale deal and the deal-making processes and that the PMO had no hand in any of it. This is important because the Modi regime is basing its defence on the Supreme Court finding nothing amiss with the mechanics of how the final contracted price was arrived at, when it is obvious it was not given  all the files related to the reservations the PNC had with respect to a Joint Secretary in PMO acting as a plenipotentiary in working out the provisions in the deal that are all to the advantage of France and the French vendor.

This entire Rafale file-load with Ram means the Modi government will have to be careful about what it says to wriggle out of a hole it has dug itself into because it can, in no time be shown to be a lie with some pertinent document or the other being splashed on the front page of The Hindu.

It is still a wonder why Modi was convinced to buy the 36 Rafales which, as I have argued, will be the classic ‘white elephants’ — good for nothing very much beyond Republic day flypasts. Surely, Doval couldn’t have advised him about the finer points of this fighter plane mainly because he knows so little about things military. There’s also no personal corruption involving Modi — that’s for certain. The prime minister is too upright a person for that.  Modi may, however, have sought some benefits from the deal to accrue to the Ambanis and Reliance Defence possibly in return for funds for the BJP’s election campaign, which kind of exchange incidentally, is par for the course. Nothing new here, and the BJP did not originate such means of financing political parties either.

I have speculated (in my books, including the latest — Staggering Forward: Narendra Modi and India’s Global Ambition) that in this context, perhaps, the reason for Modi siding with the Rafale was that France promised some highly strategic good to India. Like for instance, access by Indian nuclear weapons designers to the French inertial confinement fusion complex in Bordeaux. ICF is the means short of physical underground testing to improve thermonuclear warhead designs and to modernize the strategic arsenal, wherein miniaturized thermonuclear explosions are obtained by targeting high-intensity laser beams on small nuggets of fissile material.

This may be the aspect the Modi govt does not want to disclose and is part of the “secrecy” clause in the deal. OK. But is Modi’s desire to escape the Russian embrace so powerful as to overturn its relationship with Moscow based on decades of extremely sensitive strategic cooperation such as the access BARC weapons directorate scientists have long enjoyed to the Russian ICF at Troitsk outside Moscow? Where was the need to beggar the country to buy the Rafale to access Bordeaux when Troitsk was always available as was the Su-30 for a fraction of the price Modi pledged to Hollande?