How’s HAL not culpable for the Mirage 2000 crash (with addendum plus)? 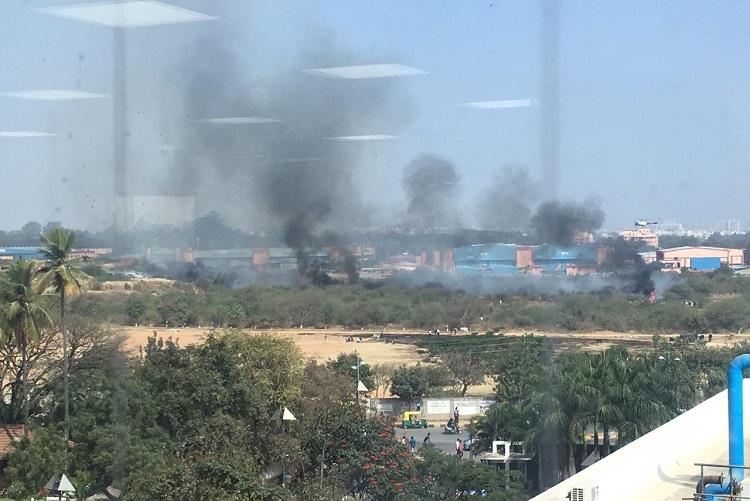 So Squadron Leaders Sameer Abrol and Siddarth Negi of the Aircraft and System Testing Establishment (ASTE) are dead in a frontline Mirage 2000 2-seater combat trainer aircraft HAL had just upgraded. They were on an “acceptance sortie” to assess whether  the aircraft was good to re-enter squadron service. Then again, anything DPSUs/HAL touch — as my previous post suggested — turns to ashes.

There are many strange and curious things attending on this accident. For one thing the Mirage 2000 is designed for positive instability in pitch, meaning the plane always pitches upwards, which attribute combines with the leading edge flaps on the wings to enhance lift. Both these features ensure that the aircraft tends to be nose up and rearing to go. So how come it failed to clear the barrier at the end of the HAL runway?

It may be reasonably speculated that there obviously was enough runway distance from beginning its run, gathering speed on tarmac, to throttling up for actual takeoff for the two pilots — both good and experienced combat jocks, otherwise they wouldn’t be attached as test pilots to ASTE — to realize that the aircraft was not responding, and they were heading into the crash barrier. Possibly surprised, they may have activated the Martin-Baker zero-zero ejection system a trifle late. (The zero-zero system is supposed to eject pilots safely even when the plane is mobile on the ground.) Should a reconstruction of the event, in fact, show this to have been the case, then HAL will happily blame the pilot for the mishap and wash its hands off the accident.

[Plus: This aspect should have been included in the original post early last evening: There’s the issue of the apparent disjunction between the pilots powering up and the engine not responding adequately. I mean if there was sufficient takeoff distance but the plane failed to negotiate a takeoff then what other conclusion is there to reach?  One can assume,  moreover, that in an aircraft undergoing upgrade the state of the electronic interfaces between command and the jet power plant would be a priority for close examination. In the event, the finger again points at HAL.]

[Addendum, 2056 hrs: Then again, eye witnesses, according to a retired HAL test pilot who informed me, say they saw the nose wheel collapse on the takeoff roll itself, and when the pilots ejected, one of them landed right in the burning wreckage, and the other was fatally injured. This deepens the mystery around the escape system, especially because the aircraft had just been upgraded.]

In any aircraft upgrade programme, wouldn’t it be mandatory for its critical systems and sub-systems to be upgraded as well? Surely the ejection system is crucial enough for safety reasons to warrant upgradation. But was it so upgraded to the more advanced Martin-Baker Mk-18 configuration at least? If not, why not? And whose fault is it that the ejection system upgrade was not insisted on as part of the aircraft upgrade? IAF?

Assuming the 2-seater had retained the old MB system, did HAL during the upgrading process at a minimum not  repeatedly test the system, check its pyrotechnics package to ensure the explosive component was in good condition and did not require to be replaced with a fresh charge so that if fired it would blow the canopy off its moorings and, simultaneously, eject the pilots clear off the wreckage? Very likely HAL did none of these things because if the system had been checked, tested and okayed, it couldn’t have malfunctioned at the first instance of use.

As is usual in such accidents, a board of inquiry will be constituted, and the chances are Abrol and Negi will be blamed for “pilot error”, and HAL will go scott free. Indeed, HAL is rarely, if ever, held accountable for anything that goes wrong on aircraft it has worked on, or produced, i.e., assembled.

But what’s with HAL and failure of nose wheels? Not too long ago, an IAF test pilot attached to HAL, Nashik, took a Su-30MKI the DPSU unit manufactured up for a spin. While landing, the nose wheel failed to deploy, forcing the pilot into a touchdown on rear wheels leading to the nose coming down hard on the tarmac and the aircraft being damaged. The BOI that followed, led by an engineer but with nobody from the flying branch on the board, held the pilot wholly responsible for this event! How the pilot is responsible for a machine that’s freshly off the HAL factory floor, put together by this “nav-ratna” DPSU in its own facilities according to its own lax standards of production, boggles the mind.  But this is how that episode panned out.

Will HAL be held culpable for the Mirage crash when the antecedent conditions are less transparent?

Senior Fellow in National Security Studies at the Centre for Policy Research, New Delhi, he was Member of the (1st) National Security Advisory Board and the Nuclear Doctrine-drafting Group, and author, among other books of, 'Nuclear Weapons and Indian Security: The Realist Foundations of Strategy', 'India's Nuclear Policy' and most recently, 'Why India is Not a Great Power (Yet)'. Educated at the University of California (undergrad and grad), he was Visiting Scholar at Princeton University, University of Pennsylvania, the Shanghai Institutes of International Studies, and Henry L. Stimson Center, Washington, DC.
View all posts by Bharat Karnad →
This entry was posted in Afghanistan, arms exports, civil-military relations, Culture, Decision-making, Defence Industry, domestic politics, DRDO, Europe, Indian Air Force, Military Acquisitions, Military/military advice, South Asia, Technology transfer, Weapons. Bookmark the permalink.

12 Responses to How’s HAL not culpable for the Mirage 2000 crash (with addendum plus)?