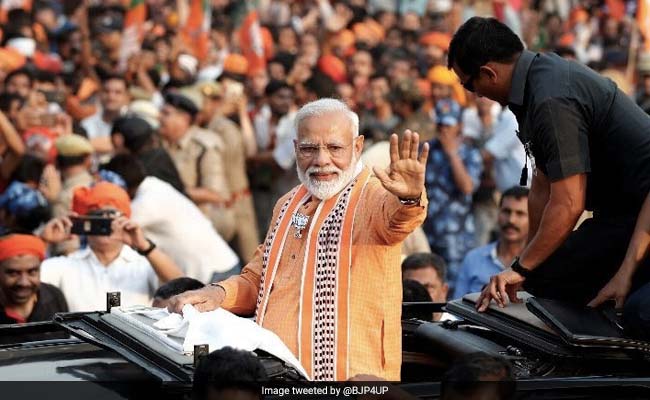 [This piece by Anubhav Gupta, Assistant Director, Asia Society Policy Institute, New York, uploaded to the Asia Society website on May 7, 2019, at https://asiasociety.org/blog/asia/qa-bharat-karnad-indias-inept-foreign-policy ]

With India in the throes of the world’s largest exercise in democracy, Indians and the international community are assessing the performance of its incumbent Prime Minister Narendra Modi. The conventional wisdom about Modi’s first term in office has generally been: disappointing on the economic and social fronts; generally successful on foreign affairs. Some analysts have even credited Modi for ushering a bolder and more engaged foreign policy.

A recent book throws cold water on such assessments. In the opening pages of Staggering Forward: Narendra Modi and India’s Global Ambition, author and Indian national security expert Bharat Karnad describes Modi’s foreign policy as “inept” and “short-sighted.” The book makes the case that Modi has been anything but bold on the international stage. While Modi’s efforts may have garnered small successes, Karnad believes he has failed in the grander ambition to propel India toward great power status. Instead, Karnad sees Modi’s India as “great power lite,” being stuck for the past five years in “neutral gear.”

The book’s critique of Modi comes from an unexpected angle. While Modi is maligned by the left (in India and abroad) for his Hindu nationalist, strong-man approach, Staggering Forward is a takedown from the other side of the political spectrum. Karnad, a research professor at the Center for Policy Research who describes himself as “India’s foremost conservative strategist,” faults Modi not for being hawkish but for being diffident.

I asked Karnad some questions about what disappointed him about Modi’s first term. The interview has been edited for clarity and length.

The book is called Staggering Forward, which suggests progress, though of the uneven kind. How would you grade Modi’s foreign policy performance?

The “staggering” in the title is meant to denote a certain diffidence evidenced in Modi’s foreign policy, which boasts, in substance, of no unique feature nor approach, being a continuation of policies pursued by the previous governments in the new millennium. 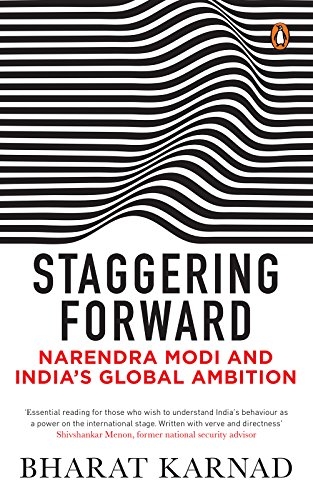 You characterize Indian leaders as being too afraid to enact “proactive, offensive, pre-emptive policies” for fear of upsetting China. What policies would you want the next Indian government to adopt toward China?

Based on the long history of the factors that command the respect of China’s rulers, I have been advocating for some two decades now and also in this book that India adopt a tit-for-tat approach. For instance, the most obvious way to react to Beijing’s very successful initiative to arm Pakistan with nuclear missiles and use that country to contain India would have been for Delhi to transfer like armaments to many more small adversarial states on China’s borders to equalize the strategic context. It would have signaled India’s intent to respond in kind and equal measure and would have quickly sobered up Beijing and telegraphed to all Asian states India’s ability to take on an ambitious and oppressive China. It would have crystallized India as a competing power node to China in Asia. A similar attitude to inform India’s trade policy would have prevented the skewed trade and severe balance-of-payments problem India now faces.

The recent India-Pakistan crisis following the Pulwama terrorist attack became a major political battleground in India ahead of the election. Politically, Modi seemed to come out on top. How did India come out vis-à-vis Pakistan and its security going forward?

Pakistan, I believe, is Modi’s greatest failure. Rather than resorting to covert warfare methods to discreetly drive home the message to Islamabad that two can play at the terrorism game, Modi has sought to make political capital out of forcefully countering actions by Pakistan-sponsored terrorist organizations, such as Jaish-e-Mohammad, that are active in Indian Kashmir. This has a dual purpose of also communally polarizing the Indian society, which the ruling Bharatiya Janata Party (BJP) hopes to benefit from. This is base tactical thinking.

A more strategic-minded leader would have used covert means when and where necessary while also seeking to influence the Pakistan government with a spate of economic incentives, such as open access to the vast Indian market, and unilateral military measures, such as demobilizing and reconstituting the Indian Army’s three strike corps — which the Pakistan Army most fears — into a single composite corps sufficient for any Pakistan contingency, and withdrawing forwardly deployed nuclear missiles from the border with Pakistan. By such means, India could have and still can reassure Pakistan, preclude it from acting the Chinese cat’s paw in the region, and regain for South Asia the unitary strategic space lost in 1947 with the Partition of India.

At the start of the book, you declare that Modi’s extensive “personalized diplomacy” has “produced no signal departure from the policies of previous governments, nor any stellar results.” You do point to one exception: strengthened ties with the Gulf States. Why has this been a priority for Modi?

If all politics is local, then Modi has been sensitive about actions that fetch him domestic political dividends. A large section of Indian society gains from the remittances, estimated by the World Bank in 2018 as some $80 billion annually; sent home by skilled and unskilled Indian labor employed [primarily] in the Gulf countries. These remittances make for India’s healthy hard currency reserves and help sustain the economies of several Indian states, chief among them Kerala, Uttar Pradesh, and Bihar. The remittance beneficiaries also constitute a large voter base, which Modi has kept pleased by cultivating, in the main, Saudi Arabia and the United Arab Emirates.

Intimacy with these Sunni majority states also balances India’s ties with the Shia majority Iran, giving India a role in the ongoing Shia-Sunni tussle in West Asia. More generally, close ties with Islamic nations symbolizes the fact that India has the second largest Muslim population in the world (after Indonesia), and is a counterpoise to India’s deep relations with Israel, on the one hand, and on the other hand, limits Pakistan’s influence in the Islamic world.

The book is about India’s place in the world, but you also write about how Modi’s tenure has exacerbated “tensions in society along caste and religious lines.” Why are these domestic divisions a problem when it comes to India’s global ambitions?

India has long projected itself, successfully, as an inclusive democratic country suffused with liberal values and exemplifying secular ideals. This image cannot but be hurt when domestic politics are communalized. India’s recent downgrading by the U.S. Commission on International Religious Freedom, for instance, will have repercussions in that many countries may be influenced by its findings, and the Modi government’s desire for India to be seen as a bastion of liberal thought and democratic action will take a hit. Further, anti-Muslim rhetoric will begin to impact India’s interactions with the Islamic world, alienate Muslim states, and cumulatively affect India’s quest for great power.

Lastly, any bold predictions about the elections?

Modi’s use of technology for development and in social welfare schemes has buffed up his credentials as a modernizer and a leader who means well and does good by the people. Moreover, his record of personal rectitude in office has left an impression on the average voter, as has his party’s performance in government. These attributes position Modi in good stead in the general elections underway.

My assessment is that Modi will be re-elected, but that his government, the BJP-led NDA coalition, will be returned to power with a much-reduced majority. However, if the majority is quite thin, Modi could be replaced as PM by someone like the Transportation Minister Nitin Gadkari, who has distinguished himself as a conciliator. Gadkari has warm relations with the Rashtriya Swayamsevak Sangh — the social service organization associated with pushing the Hindu nationalist agenda that is the power behind the BJP — but also with many leaders in the opposition. The belief is that he will be better able than Modi to draw support from small parties in the opposition, and thus beef up the BJP coalition.