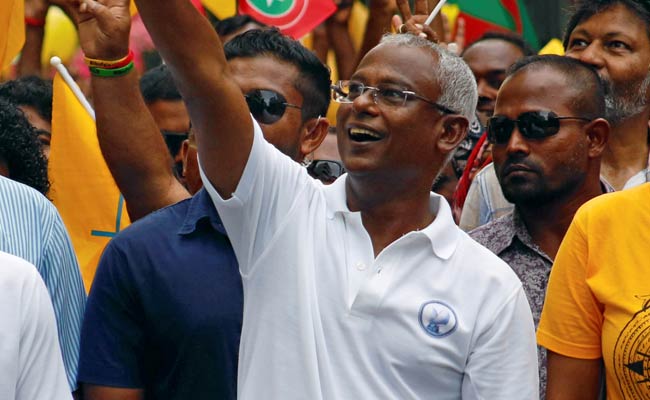 A vile incubus is off India’s back. The autocratic Abdulla Yameen has been ejected from the office of President of Maldives by the people in the elections that everybody had assumed would be trifled with by Yameen to extend his reign.  Instead the popular, soft-spoken, Mohammad Solih, is the new President and Delhi can heave a sigh of relief.  Though until he went on television to concede the elections, there was widespread apprehension that Yameen would again do the dirty on Maldivan democracy and use the police and the country’s small military to forcibly reverse the election outcome and reinstall his dictatorship.

It would appear Yameen was stunned that he had been overthrown by the people. Much like Indira Gandhi in the elections called by her after the Emergency, he did not try and rig the polls, certain that the grateful masses would return him to power with a popular mandate to stick with the course he had set Maldives on. Yameen spent uncomprehending  hours, in the presidential palace, contemplating the election results, unable to reconcile to the fact of his peaceful ouster, before finally and formally throwing in the towel.

The mild-mannered Solih who takes control in Male is a committed friend of India desirous of restoring to it its traditional role as well-wisher and prime protector of the archipelagic country of some 1,200 atolls in the southern Indian Ocean stretching over thousands of miles of the ocean.

Solih needs help to begin distancing Maldives from China and shrinking its oversized presence in his country which had been pushed by Yameen into a classic debtor country status vis a vis China. Maldives owes Beijing $1.3 billion. Its patent inability to service this debt which amounts to 35% of Maldivan GDP led to Yameen signing away whole atolls to China where Beijing, under cover of building infrastructure, is erecting military-use infrastructure. Delhi should offer every help and assistance to dismantle the Chinese presence and take over completion of such underway Chinese projects as Solih prioritizes. This will eliminate the residual threat to India’s security from China which the Modi regime all these years did little to diminish, with the Indian High Commissioner in Male reduced to pleading with Yameen to refrain from doing this, that, and the other.

What the BJP government should do on the most urgent basis is for once pull its head out of the sand where China is concerned, and sanction an outright grant of $1.3 billion to  the new Solih dispensation  to enable it to clear his country’s debt with the Chinese and to regain for India not just its premier status in Maldives but loads of goodwill of the people. Such a reminder to Maldivans of India’s friendship will go far to right the India-Maldives relationship, put it to an even keel. This is the first break India has got in a long time, in the face of China racking up series of successes in the neighbourhood with Xi’s “debt-book diplomacy”.

It may be no bad thing in this context for Modi himself to make a quick dash to Male to touch base with President Solih, congratulate the Maldivan people for their democratic temper, offer to station an Indian naval flotilla in nearby waters in case Beijing acts up or a company of Special Forces should Yameen instigate the Maldivan forces to negate the election results, and invite him to be the chief guest at India’s 2019 Republic Day parade and celebrations. That will be the cherry atop the India-Maldives cake.

Senior Fellow in National Security Studies at the Centre for Policy Research, New Delhi, he was Member of the (1st) National Security Advisory Board and the Nuclear Doctrine-drafting Group, and author, among other books of, 'Nuclear Weapons and Indian Security: The Realist Foundations of Strategy', 'India's Nuclear Policy' and most recently, 'Why India is Not a Great Power (Yet)'. Educated at the University of California (undergrad and grad), he was Visiting Scholar at Princeton University, University of Pennsylvania, the Shanghai Institutes of International Studies, and Henry L. Stimson Center, Washington, DC.
View all posts by Bharat Karnad →
This entry was posted in asia-Pacific/Indo-Pacific, Asian geopolitics, China, China military, civil-military relations, Culture, Decision-making, Geopolitics, Great Power imperatives, India's strategic thinking and policy, Indian ecobomic situation, Indian Navy, Indian Ocean, Maldives, MEA/foreign policy, Military/military advice, society, South Asia. Bookmark the permalink.