If Imran Khan is PM, it will be hard line against India 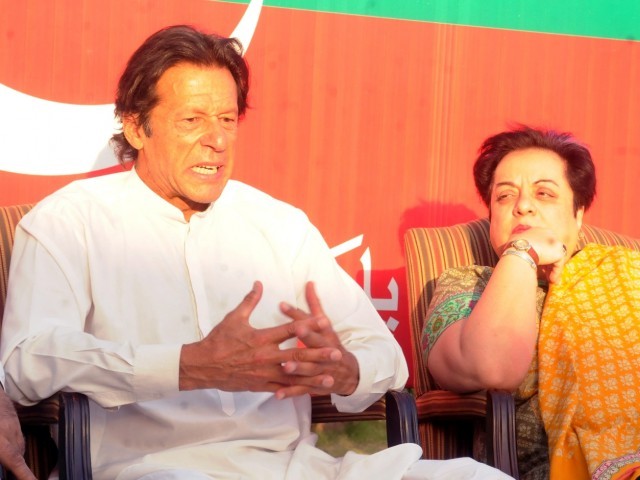 (Shireen Mazari on the right)

A leader is known by his/her advisers. The policies the leader is likely to pursue are telegraphed by what  these advisers may have said and written. Should the Pakistan Tehreeq-i-Insaaf (PTI) party win the general elections on Wednesday, July 26, Imran Khan will be installed as Prime Minister. Every one expects this will happen, considering he is the Pakistan Army’s candidate, as Nawaz Sharif once was, and that the ISI will ‘work’ the levers to obtain the desired result. In which case, the person to look out for is the irascible Shireen Mazari, a Pathan, who once threatened to take another female PTI party-mate to a tribal jirga for purveying falsehoods about her.

Mazari was Director-General of the Pakistan government funded thinktank, Institute of Strategic Studies, in Islamabad, in 2000-2008, and is PTI’s ‘Information secretary’ and advises Imran on foreign and defence affairs.  She may well be his choice as NSA or Pakistan’s Foreign Minister to pit against Sushma Swaraj or, alternatively, even defence minister. In either case, Delhi should be prepared for the hard line.

The Imran Khan attending conclaves held by media houses in Delhi in the past is not the Imran Khan who will become PM. He will mirror the Pakistan Army’s views and act as the guardian of its interests. He is likely to toe a very tough line that Mazari and Army propound generally and vis a vis India.

Mazari has led the campaign waged by Imran since 2013 to end all US drone strikes in the Khyber-Pakhtunkhwa (KP) province. She was very vocal on this issue,  charging the CIA director John Brennan with “committing murder and waging war against Pakistan” and demanding the interrogation of the then CIA station chief in Islamabad to ascertain the identities of the pilots controlling the drones that eliminated Hakimullah Mehsud and struck a seminary in Hangu Dist in KP, killing a spiritual leader of the Haqqani network. Indeed, Mazari publicly criticized the Pakistan Army for not shooting down American drones. It is certain, a PTI government will seek an end to all US drone strikes inside Pakistan, while countenancing such hits on Taliban targets within Afghanistan.

On nuclear matters, Mazari is an out and out hawk, lauding the Pakistan Strategic Plans Division (SPD) for its India-centered approach. In a compendium of research writings on ‘Arms Race and Nuclear Developments in South Asia’ published in 2004 by the Islamabad Policy Research Institute, in a  companion piece to my research paper deconstructing the Indian nuclear doctrine, Mazari had revealed SPD’s thinking and the likely nature of the build-up of Pakistan’s nuclear arsenal. She made clear — and this was the most important revelation, particularly in hindsight that “If India seeks to opt for an even-spread amongst its nuclear triad of forces,  then Pakistan needs to  have an edge on land-based developments in terms of numbers.” Except,  the Indian nuclear weapons mix, evenly spread or not,  triggered the rapid enlargement of Pakistan’s stock of short-range tactical missiles in the last 15 years — with the supposedly nuclear-tipped  Nasr 40mm rocket inducted in large numbers as that country’s calling card. This development of Pakistan seeking a missile edge over India has validated Mazari.

I am personally acquainted with Shireen Mazari owing to the seminar circuit I was active in, in the last decade. As a realist she seemed motivated by notions of hard national interest, and always interpreted Indian actions and moves in the most negative way. It strikes me that for these very reasons, the PTI regime would happily negotiate — as she has advocated — conventional military draw-downs with India. This may be no bad thing for the Modi government to try and negotiate in good faith as a means of stabilizing the border, the subcontinent’s security situation, and finally reorienting the Indian armed services to the only credible threat and military challenge India faces — China. Such a modus vivendi will lead naturally to the two sides accepting the solution for the Kashmir dispute offered in 2007 by Gen. Musharraf — Mazari’s one time chief patron.

This will necessarily require something I have long advocated — collapsing the three strike corps into a single composite armoured corps with several independent armoured brigades, and otherwise shifting the manpower and usable materiel assets to forming three offensive mountain corps for the China front. In practical terms, this could mean ‘compositing’ II Corps and converting the Strike Corps  — I and XXI into offensive mountain warfare formations. There’s no more sensible option for effectively using the Indian defence rupee which otherwise is annually squandered in upkeeping the army’s cash-guzzling 3-strike corps complement.

But will the BJP government negotiate such draw-downs? Apparently not, And for all the obvious reasons of retaining Pakistan as a convenient foe to beat up on for domestic political benefits.

10 Responses to If Imran Khan is PM, it will be hard line against India