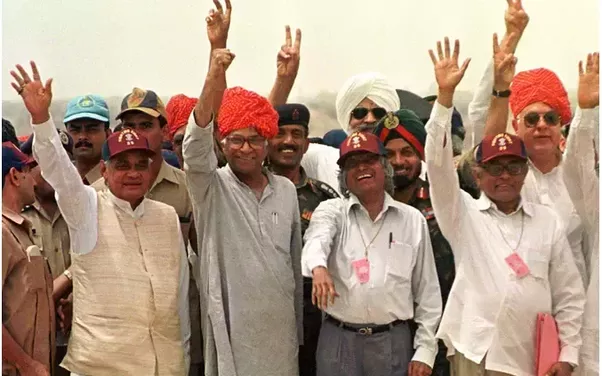 The Shakti series of underground tests 20 years ago were the last, stifled, hurrah of the Indian nuclear weapons programme. Stifled because the thermonuclear device tested on May 11, 1998 was a dud, and the last hurrah because the weapons unit at the Bhabha Atomic Research Centre, Trombay, thereafter, went into eclipse, its best and brightest abandoning it. After all what scientific and technological challenge is there when there are no advanced fission, fusion and tailored-yield armaments to design and develop? Worse, official Indian thinking on deterrence is contradictory. Mired in minimalism, it has relied on threats of “massive retaliation”. This mandates the use of a large number of nuclear bombs to dissuade Pakistan from nuclear “first use” and, therefore, an extensive nuclear armoury of our own. So, the nuclear deterrent cannot be “minimum”.

The confused nuclear milieu has been obtained by the Indian government under three Prime Ministers – Atal Bihari Vajpayee, Manmohan Singh, and Narendra Modi. With the ‘no testing’ pre-condition of the 2008 nuclear deal with the United States in mind, it has decided that, the country’s strategic arsenal is perfectly adequate now and in the future with just the 20 kiloton (KT) weapon/warhead, the only tested and proven weapon in the inventory. Also, under American pressure, the Indian government has put the brakes on the 12,000km-range inter-continental ballistic missile (ICBM) project and the testing of the indigenous MIRV (multiple independently-targetable re-entry vehicles) technology to launch several warheads from a single missile that’s been available for the last 15 years.

In this period, countries who prize their strategic security accelerated their capability build-up. North Korea shrugged off US pressure, answered American bullying with brinksmanship of its own, successfully tested a two-stage 250-350 KT hydrogen bomb, for good measure acquired the Hwasong ICBMs able to hit US cities, and silenced President Donald Trump. Nearer home, Pakistan, ahead of India with 130 nuclear weapons/warheads and counting, boasts of the most rapidly growing nuclear arsenal. It has four 50MW weapon-grade plutonium (WgPu) producing reactors operating in Khushab. Meanwhile, India has yet to build the second 100MW Dhruva WgPu reactor sanctioned in the mid-Nineties. North Korea and Pakistan are where they are courtesy the active “rogue nuclear triad” run by China which guarantees that Islamabad too will brandish thermonuclear weapons of Chinese provenance.

Delhi eschews anything similarly disruptive (like nuclear missile-arming Vietnam) because Indian leaders are more intent on polishing the country’s reputation as “responsible power” and winning plaudits from the US for showing “restraint” than in advancing national interest. So the country’s strategic options end up being hostage to the interests of foreign powers. India’s do-nothing policy has eroded its relative security, and its stature in Asia and the world as a strategically autonomous and independent-minded country.

India can recover its strategic policy freedom by taking several steps. It should fast forward the second Dhruva military reactor and ICBM development, and test-fire MIRV-ed Agni-5s. In lieu of nuclear testing, which Indian Prime Ministers have lacked the guts to resume, two things need to be done to configure and laboratory-test sophisticated thermonuclear weapons designs. The laser inertial confinement fusion facility at the Centre for Advanced Technology, Indore, needs to be refurbished on a war-footing, and a dual-axis radiographic hydrodynamic test facility constructed.

As regards the software of hard nuclear power, the nuclear doctrine has to be revised – something promised in the Bharatiya Janata Party’s 2014 election manifesto but so far ignored by the Modi regime. Without much ado the newly founded Defence Planning Committee should re-work the doctrine to stress flexible response, with ambiguity enhanced by publicizing the fact of doctrinal revision and the jettisoning of the “No First Use” principle, but nothing else. India will thus join the rest of the nuclear weapons crowd in keeping every aspect of its nuclear policy, doctrine and strategy opaque. There are good reasons why, other than in India, there’s no enthusiasm for nuclear “transparency”.

In keeping, moreover, with the passive-defensive mindset of the government and expressly to throttle aggression by a militarily superior China, technologically simple, easy-to-produce, atomic demolition munitions have to be quickly developed for placement in the Himalayan passes that the Chinese Liberation Army is likely to use, backed by forward-deployed canisterised Agni-5 missiles for launch on warning. The onus for India’s nuclear first use will thus rest entirely with China.

[Published in the Hindustan Times, May 11, 2018; in the net edition entitled “India must revise its nuclear policy and keep its strategy opaque”, at  https://www.hindustantimes.com/opinion/india-must-revise-its-nuclear-policy-and-keep-its-strategy-opaque/story-MRwcgzYXypIHf1j0V5iUoI.html