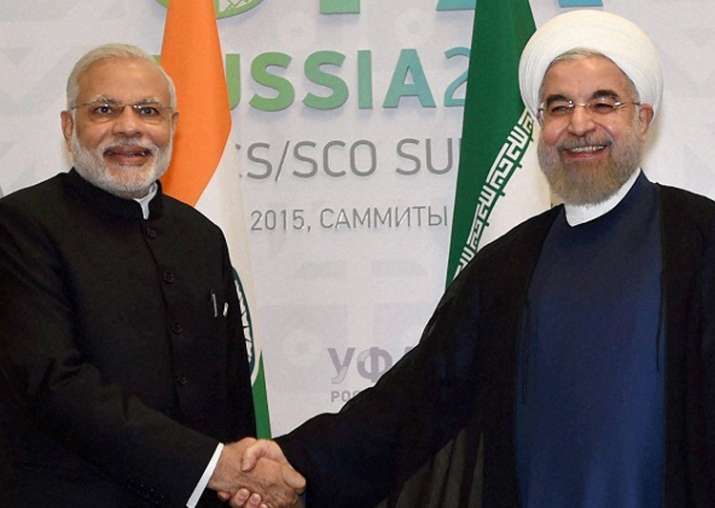 Finance Ministry mandarins have been wringing their hands for a while, wondering just  how to carry on doing business with Tehran in case US President Trump nixed the Joint Comprehensive Plan of Action (JCPOA), aka, nuclear deal with Iran, without getting targeted by America. That shoe has now dropped. Trump did it, he said, because he didn’t care for its “sunset provisions” that would leave Iran “on the verge of a nuclear breakout” and to avoid a “nuclear arms race in the Middle East” and economic sanctions are back on again. The Trump Administration expects that dealing harshly with Iran will also signal to the North Korean leader Kim Jong-un, whom Trump is scheduled to meet soon, that playing hardball will cost him and his country plenty. Except, unlike Tehran, Pyongyang already has proven thermonuclear weapons and ICBMs to reduce any US city to irradiated ashes, and  that’s a different game altogether where Messrs Trump & Bolton have less play than they assume they have.

But arms races are not scary. Have argued (in my Nuclear Weapons and Indian Security) that nuclear arms racing isn’t all bad and is, in fact, a kind of arms control. Whatever enthusiasm the countries initially start out with soon peters out once the concerned governments come to grip with the outlays demanded by limitless racing, at which point the situation stabilizes. Trump’s trashing the JCPOA may only hasten the initiation of this racing cycle between Israel and Iran.

Except, the European signatories of this deal and close US allies — UK, France and Germany, with China and Russia backing it, fear the costs of the US sanctions on their ongoing economic and trade relations with Iran, and how these would have to be terminated lest their own companies and official agencies come within the American sanctions penumbra. So they have long expressed their aversion to the ditching of this agreement because they point to its preamble wherein Tehran promised to remain non-nuclear even after the formal duration of the deal. Of course, trying to thwart the Trump move, the Iranian President Hassan Rouhani threatened “vigorously” to pursue weaponization. It didn’t work.

America’s friends are unhappy because they will now be forced to choose between Washington and Tehran. It is clear that Trump, advised by John Bolton, his NSA, who sees in this action a means of imposing regime change, didn’t care about US allies’ pleas to cease and desist. Because he is convinced that the deal cannot stand once US sanctions are rolled out. And that the Joint Statement issued by Angela Merkel, Emmanuel Macron, and Theresa May as reaction stating that “Our governments remain committed to ensuring the agreement is upheld, and will work with all the remaining parties to the deal to ensure this remains the case, including through ensuring the continuing economic benefits to the Iranian people that are linked to the agreement” means nothing.

Rouhani is a moderate hemmed in on the one side by the ‘Pas Daran’ (Revolutionary Guard)-led nationalist group including the militant shia clergy, the conservative population in the rural areas, and is supported by the “bazaari” (small shop owners and traders) interests, who incidentally, crucially provided the financial muscle for the ayotollahcracy in that country, and on the other side by the large and disaffected youth, the middle class, and the intelligentsia who chafe under the restrictive Islamic regime and crave normalization.

The prospects of  the Iran deal staying depends on UK, France and Germany parting ways with the US. This doesn’t seem likely. Once all is said and done they will pay the price of the disrupted economic ties and crawl back into America’s corner. So the Modi government’s hope that India will be able to ride out the sanctions storm by siding with the Brit-French-German combine and doing what they do, won’t work.

That leaves Delhi to consider what Russia and China will do. Russia is already under US sanctions and now finds in Iran a fellow victim with which it can do business to their mutual benefit. One can expect, for instance, that Tehran will begin seriously to buy the most advanced warfighting paraphernalia that will make any serious military threat by Washington difficult to carry out, so Bolton’s option of kicking out the mullahcracy system goes out the window. China, like India, faces a dilemma. It can disregard the American sanctions but only because it can threaten the US with counter economic targeting if Chinese interests are hurt in this sanctions melee, and even with a trade war if Trump wants it. China has enormous economic resources and can so deploy them against America.

What does India do? With his US tilting policy that simultaneously distances India from Russia Modi has tried hard to please Trump, which so far has not prevented Trump from going all out with his moves to close the US as economic bolthole for the Indian middle class — H1B/H-4 visas and chain migration, put imposts on imported Indian steel and aluminium, and then muster the cheek to demand that India sign the remaining two “foundational accords” — CISMOA and BECA, with the former permitting the US formally to penetrate the Indian government and military’s communications net. This was opposed by the Indian armed services but per news reports these accords are on track to be approved by Modi. Other than pushing the old F-16 aircraft for IAF use, Trump has thrown another crumb — sale of Predator drone!

The fact is the fickle US hasn’t responded to Modi’s overtures, and Russia is alienated,  so what could have been a very strong quadrilateral of India, Russia, China and Iran to neutralize the effects of the US sanctions, is unavailable to Delhi. Still, no harm if Modi tries to cobble together such an issue-based coalition. Japanese PM Shinzo Abe has done just such a thing by calling a meeting of Japan, China, and South Korea as, perhaps, a body to pick up the pieces after Trump is done (though the South Korean deputy foreign minister justified it as a runup to making the Jong-un-Trump summit successful).

As mentioned, these sanctions would fail if US’ European allies and Russia and China stayed stuck to the JCPOA and frustrated the American sanctions regime. This won’t happen. Though, no doubt, starting tomorrow members of the US policy eco-system in Delhi headed by the Indian chapters of Brookings and Carnegie will begin churning out commentaries and analyses to show why India should stand by Trump, which line will be picked up and embroidered over the weeks by the usual op-ed writers in Indian dailies and talking heads on TV and other electronic media.

The question is this: Is India so bereft of leverage that it has no alternative? I have been pounding on this issue for long — but why doesn’t Modi manipulate access to the Indian market not just against the US  but even China to get what it wants? Trump will have to pause in his blundering ways if he is faced with restrictions on American companies operating in India. And why can’t Delhi have a meaningful exchange — the use of Indian military bases, for example, for advanced military technologies (instead of being fobbed off with predator drones and the like)? And why can’t India go back to using friendship  and intimacy with Russia to lever a more equitable relationship with America?

And this is just the opportunity, moreover, to replace the British, German, and French  companies in their the businesses in Iran, and open up that entire realm of economic possibilities by getting the versatile and capable Indian manufacturing sector to meet Iranian demands and requirements. At a more elevated level, India can be in league with Russia, China, Iran, southern and southeastern Asia, and Central Asian states to form an economic system to rival the one dominated by the US?

And, instead of despairing, Finance Ministry bureaucrats better begin exploring oil payments options routed through the Chinese renminbi or the Russian rouble channels. The promise of this alone will further steel Xi’s and Putin’s intentions to take on the US. These are the sorts of options that need fleshing out, rather than surrendering to the traditional way of conducting business the Western way. In an independent path lies India’s future. Surely, even Modi sees that giving in again and again to Washington is to erode self-respect and to strengthen the Western conviction of India as a country that can be easily pushed around. That’s the reputation Modi’s India is developing. Time we sloughed it off. India is nobody’s plaything, or is it?

Perhaps, Modi should bear in mind the primary lesson of Trump’s disowning the nuclear deal with Iran. It is that the United States is an unreliable partner and that, for very good reasons, India would be well advised to maintain a certain distance with the US and not sign any meaningful accords with it. Becoming too chummy with America can be a liability — never know when it will be thrown under the bus. And Washington can disavow any agreement signed in good faith at any time. Remember Tarapur?