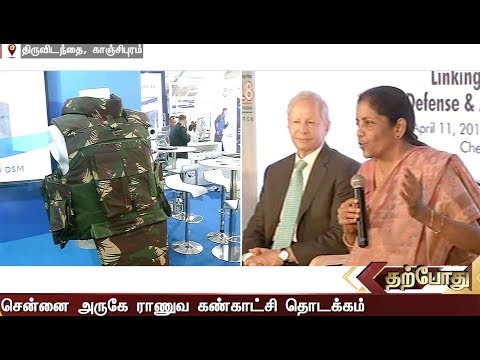 Defence Minister Nirmala Sitharaman is proving to be a one-person wrecking crew for India’s aspirations to emerge as a significant designer-producer of military goods, including capital weapons platforms (combat aircraft, warships, artillery and armour).

Public figures, especially politicians, should be warned that it is safer to be perceived a fool than open one’s mouth and prove it.  Sitharaman who is careening from one self-made disaster to another has done just that, opened her mouth. Recall that recently she had appointed a so-called Defence Advisory Council or Board or something, to counsel her on technical matters related to her brief, which initiative blew up in her face when it was pointed out that two of the eminences she had sought to place in it were US citizens! I had warned in a blog at the time of her appointment as defence minister  about her past employment with Price WaterhouseCooper and BBC, and hinted at what this may portend for such decisions as she would be called upon to make in MOD. In which context, may be this was not all that great a slip after all considering what she said in Chennai yesterday at the 2018 Indian Defence Expo.

The amateurish minister, apparently bent on dishonouring the office she holds and plunging the Modi government into still hotter political waters than it is already in owing to just about everything in the country that can go wrong, going wrong for it, asserted that the armed services were free to source their requirements from anywhere in the world and that the government was not in any position to compel them to buy Indian.

Here’s her quote in extenso for readers to judge: “When I am promoting Indian exports, Indian manufacturing, I am also telling the forces to procure domestically as much as possible. I would want to draw  a thin line between the government’s enthusiasm to make sure the production capabilities are such that they meet international standards and are export-worthy and the other side of the line where the Army, Navy, or Air Force make their decision on what they want, what combination of equipment they want and in that that combination if an India produced item fits in well. I can only go that far and not further, just as they can only go that far and not further without compromising each other’s interests. I can’t imagine prevailing upon them. We will only want them to give space to local manufacturers and buy indigenous products.” (For the quote see “Can’t force ‘Made in India’ arms on military: Nirmala”, Times of India, April 12, 2018)

Astonishingly, what the defence minister thus  proclaimed was that the Indian military was more sovereign than the Indian government, that the armed services are entirely free to decide the armament they want, write up the specifications — derived from brochures of Western arms companies, such as to fit foreign weapon systems, and go ahead and indent for them, forcing the government to buy it for them, while completely ignoring the government’s policy aim of achieving arms self-sufficiency for the country and undermining the investments in thousands of crores of rupees in building up India’s defence industrial wherewithal and design-to-delivery capability in the public and private sectors.

Did Sitharaman clear this quite extraordinary policy pronouncement with Prime Minister Narendra Modi? If she did, it means that Modi has signed off on this line of thinking, and that India’s status as an arms dependency is now formally cemented, with the message telegraphed clearly to foreign countries and their arms industries that India will hereafter buy anything military as long as its armed services can be prevailed on to first ask for it from the government. And how easy is that to arrange? You can bet the services headquarters will be racing with each other to dust up their wish lists for presentation to the Defence Minister, hoisting Sitharaman with her own petard. And the foreign arms companies will be just as quick off the blocks to find their marks among the senior officer cadre in the three Indian armed services who will favour this or that armament and induce their services to demand them as “urgent requirement” of course, as minister Sitharaman has advised.

What then of the Modi initiative to train Indian defence attaches and task them to sell India-made military goods to countries they are posted in? How’s this to work then? Which demented developing state will buy military equipment made in India that the Indian military turns up its nose at? Conversely, won’t the biggest selling point for a genuinely India-designed and made weapon systems be that the Indian armed forces — one of the largest in the world — are using them in vast numbers? But so basic an aspect of the arms trade has escaped Modi, billed as a “prime marketeer”. He may as well close up the Indian defence industry shop.

Sitharaman’s “thin line”, moreover, is more confusion confounded because all that the three services need to ensure when articulating their armament demands identifying the items and the sources from where these are to be procured, she said, is that they not “compromise” each other’s interests, the larger national interest of incentivising an indigenous defence industry to grow and flourish by first selling its wares to the Indian military  be damned!

This is the denouement ‘Make in India’ was headed towards and was so predicted in my writings and in my posts on this blog. But even a professional skeptic such as I didn’t foresee the brazen-ness with which this government means to drive the nascent Indian defence industry into the ground with not even the proverbial fig leaf for cover.

Or, Sitharaman believes in magic! How else to explain why she believes that the Indian defence industry does not need the massive orders from the Indian military channeled deliberately by the government to it in order for it to first set itself up as a viable and going concern that can thereafter as effectively and efficiently meet the Indian armed services’ requirements as service an export market? Or, does she believe that the Indian defence industry is already on par with the US, Russian, French, British and Israeli defence industries, and needs no help whatsoever from the government? Even if she believed this was the case, this invitation to foreign arms suppliers for an open season in India is absolutely incomprehensible, considering that even the US does not permit its military to source its armaments from wherever it may choose; it has to meet exacting Congressional standards that insist on preference be accorded American defence majors. Apparently, the muddle-headed Sitharam thinks India is more advanced than the US, or at least far richer to be able to afford her/Modi governemnt’s follies.

This is a devastating development, one that the ignorant and security-wise iliterate  Indian media and commentariat will not pay sufficient attention to. But it is certain it will growingly be a political issue that the opposition parties will gladly prepare as a noose to tie around the BJP government’s neck.

If the usual clarification is not forthcoming from  MOD, it means the above is a fair reading of  Sitharaman’s pronouncement, and that a new, infinitely more regressive, arms procurement metric is being established as the norm. It bodes very ill for the country (but is harbinger of goodies for defence and MOD personnel in the defence procurement loop because they will now be courted by foreign countries as never before).

Sitharaman and Modi will go down in history for all the wrong reasons as ultimately dim-witted leaders without the strategic mind or wit to do the right thing by the country.  If this is not to happen, the Prime Minister will be well advised to disavow Sitharaman’s statement, pronto, and — if she has to be retained to save face — to shunt her out to some nondescript ministry where if she can’t help, she can do no harm either.

22 Responses to Is the Indian military more sovereign than the Indian government?