Why is India’s national interest hostage to US’ Iran policy? 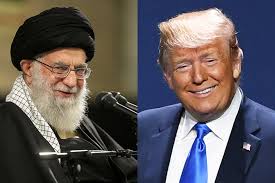 The fears I have long voiced are coming true. The US is ramping up its combative rhetoric, talking up the non-existent Iran threat to the region, coercing its friends into  complying with its demand to zero out oil/gas imports from Iran and otherwise insisting that everybody  join in applying “maximum pressure” in the hope that this will, if not lead to a regime change — wishful American thinking than, at a minimum, to Tehran renegotiating the 2015 nuclear  deal (Joint Comprehensive Plan of Action) to secure an indefinite extension of the Iranian nuclear  weapons-related inactivity limited by JCPOA to just a 15 year- time frame.

The “bazaari” tilt of the mindset of the ruling ayatollahs means Iran and the US will eventually reach a compromise. But during this testing time, Tehran will discover who its friends are. So, while Tehran’s economic ties with the US will rapidly mend because, well, the US is the proverbial 600-pound economic gorilla that all countries have to come to terms with, links with states, such as India, that left Iran in the lurch, could be downgraded. This will, as I keep warning, imperil India’s grand geopolitical design for Afghanistan and Central Asia and for outflanking China (and, minorly, Pakistan) seawards  pivoting on connectivity ex-Chabahar, the Iranian port on the North Arabian Sea, and 75 kms up the coast from Gwadar.

I mean how forgiving can we expect Tehran to be as Delhi, despite having the political-military leverage has consistently shown it lacks the will to say NO to Washington, and always seems over-eager to please America. To wit, its undue haste in reducing the inflow of Iranian oil — from 14+% to 10% in just the last year as dictated by the Trump Admin.

The deficit is to be made up by increased buys of Saudi oil, in line with Trump’s promise that Saudi Arabia can replace Iran. But Riyadh’s prospective energy stranglehold on the Indian economy may not be a good thing. Oil, offers of investment, etc are all very well but it may come at a steep price. The strong wahabbi element in that country has always seen ‘al Hind’ as the great prize and pursued its agenda of spreading the tenets of harsh desert Islam in the subcontinent. A Saudi oil dependent India will be less able to resist the wahabbi ingress or to take forceful measures, like strict policing of Arab charitable funds channeled into this country to set up a supportive eco-system of mosques and mullahs propagating an alien ideology — wahabbism.

While External Affairs Minister Sushma Swaraj was right in telling her visiting Iranian counterpart, Javad  Zarif, seeking some reassurance,  that the new government, come May 24, will take the call on how much oil to import from Iran and how to pay for it, a cleverer move would have been for the Indian government to issue a statement asking both the US and Iran to not disturb the peace in the region. Delhi should also be more active in establishing an alternative non-US dollar financial regime for energy transactions that Russia and China are considering and even some European states are interested in, and which Zarif has said Tehran is agreeable to.  Swaraj should also have indicated that big power coercive diplomacy  has its limits, that alternatives exist, and that India will retain its policy of freedom of action.  The Modi regime didn’t do any of this and lost the chance of gaining Iranian goodwill and consolidating India’s traditionally strong links.

Notwithstanding the talk of Trump backing up the two carrier task force deployment in the Gulf by sending an additional 120,000 troops to the region, the reigning Ayatollah, Ali Khamanei, remains unintimidated. He has stated that there will be no war, a refrain repeated by Pompeo, especially after his visit to Brussels to confer with European allies who told him clearly that Iran had offered no cause for Trump to shred the nuclear deal and that US belligerence may lead to war in which they will not join. Russian president Putin also must have advised Pompeo not to precipitate hostilities  — a Reuters report mentioned that Putin talked of the need to maintain “stability” of global oil supply — a code word for not tolerating any disruption that US military intervention may create.

Except, just such intervention is, perhaps, sought to be engineered with reports of oil tankers being hit, off Fujeira, by sabotage attacks. Who carried out such strikes assuming they actually occurred, is a mystery. But whether Saudi Arabia and Israel are involved in covertly managing them or not, they certainly hope the US will somehow be offered the provocation for American forces to swing into action against Iran.  Except, attacking Iran will likely embroil the US in a real fight with no guarantees that Russia and China won’t assist the Iranian military spearheaded by the pasdaran (Revolutionary Guard) with a view to embarrassing the US military.

A sobered up Pompeo said “We’re looking for Iran to behave like a normal country”. This was strange coming from the chief diplomat of a state that’s behaving so abnormally as to emerge as a menace to international order. After all, how many countries have acted as the US has done since Donald Trump became President — ripping up international treaties at will (Intermediate Nuclear Forces Treaty), shredding specific country-deals   (JCPOA), decimating economic arrangements (Trans-Pacific Partnership), abusing allies and weakening NATO, and hurting its “strategic partners” by, for instance, relentlessly hounding India — undermining its economic and geo-strategic interests. In contrast, the “bad ass” antics of Kim Jong-un are excused even though he loses no opportunity to mock Trump and thumb his nose at the US, and does exactly what Washington doesn’t want North Korea to do. Like shoot off ballistic missiles, leaving the US President to make excuses for it (“They were short range missiles”!).

The tactics North Korea has used to stymie the US and tame Trump is an object lesson in how to handle America. But that requires a ballsy leader.

5 Responses to Why is India’s national interest hostage to US’ Iran policy?