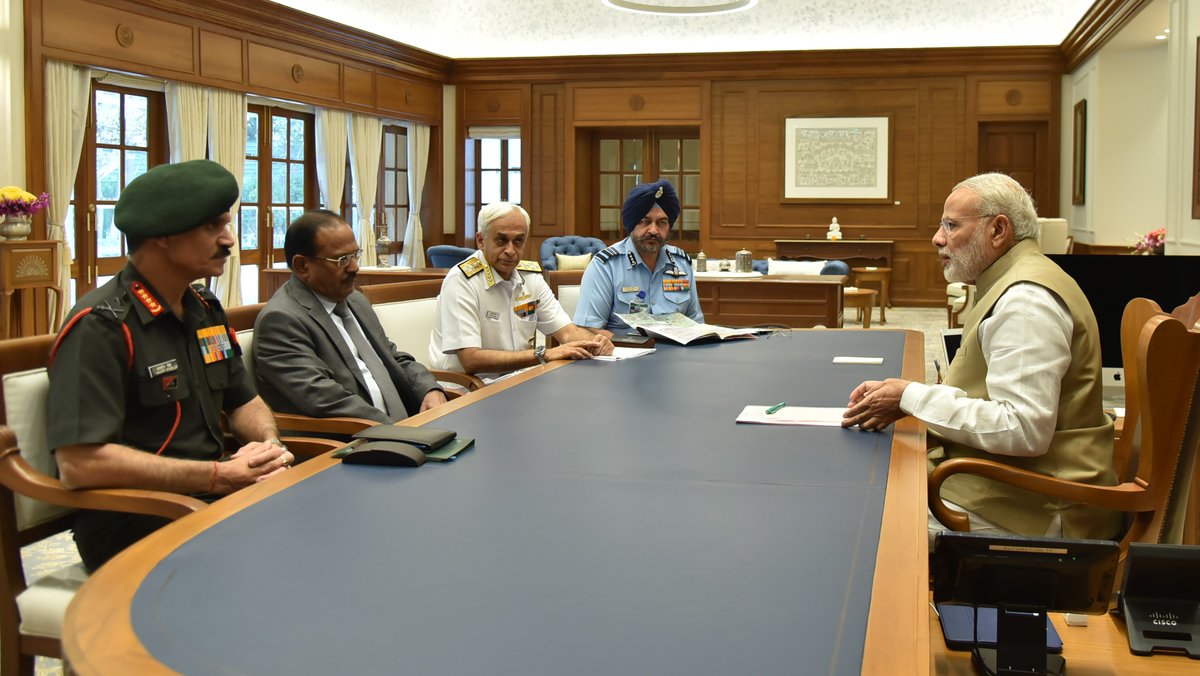 The April 11 letter by some 150 senior retired military personnel, including eight services chiefs of staff, to the supreme commander of the Indian armed forces, President Ram Nath Kovind, raises questions about whether legitimate credit taken by a government for ordering cross border retaliation against terrorist outfits, and the rising political awareness and involvement by retired generals and the like in party politics, is not being mistaken for “politicization” of the military.

“We refer”, said the letter, “to the unusual and completely unacceptable practice of political leaders taking credit for military operations like cross-border strikes, and even going so far as claim the Armed Forces to be “Modi ji ki sena”. It urges the President to take “necessary steps to urgently direct all political parties that they must forthwith desist from using the military, military uniforms or symbols, and any actions by military formations or personnel, for political purposes to further their political agendas.”

Much should not be made of UP Chief Minister Adityanath’s reference to “Modiji’s sena”. The yogi is the average cowbelt politician with limited knowledge and worldview who cannot be expected to do other than capitalize on a popular military action in a difficult election campaign. It is not unreasonable for the ruling Bharatiya Janata Party, in any case, to claim credit for reacting aggressively to terrorism for a change when the previous two PMs – Atal Bihari Vajpayee of BJP and Manmohan Singh of the Congress Party, lacking the stomach for a fight, failed to order retaliation in the face of more severe terrorist provocations than the suicide bombing of the CRPF convoy in Pulwama – the strike on Parliament, the symbol of Indian sovereignty, in December 1999 and the seaborne attack on Mumbai in November 2008, respectively. Surely, if hard military reaction and proactive or pre-emptive attack on adversary forces becomes the norm, as it should be, then there will be no political premium in crowing about it.

The issue really is something else – the civil-military tensions rife since the dawn of the Indian republic. Ever since the military was partitioned along with the country in 1947, the carryings-on of the rump element – the Pakistan Army, carved out of the Indian Army, has occasioned unease this side of the border. The apprehension of the “Ayub Khan” virus infecting Indian generals and infusing them with ideas about taking over the government has worried the political leadership. The elite sections of the permanent secretariat — the colonial era Indian Civil Service and the follow-on Indian Administrative Service have in their bureaucratic self-interest subtly and not so subtly kept such paranoia stoked, leading to the loss of status and standing of the Indian armed services, for instance, in the ‘warrant of precedence’. At one time, Commander-in-Chief, India, ranked next only to Viceroy in importance; today armed services chiefs of staff are 11th or 12th in the rank of officers of state and coeval with Principal Secretaries to the Government of India.

The fear-laced and deliberate institutional diminution of the armed forces led to the Defence Minister VK Krishna Menon publicly belittling General KS Thimayya in the late 1950s, the latter resigning in protest, being compelled to withdraw his resignation by Prime Minister Jawaharlal Nehru, and then being humiliated in Parliament when Nehru sided with his cabinet colleague. This was a systematic takedown of the army chief. It had echoes in the subsequent run-in General SMFJ Manekshaw had with Menon, again in the half-baked January 2016 story about an armoured column heading towards Delhi published by a set of hyperventilating journalists briefed by an obliging civil service-intelligence agency combo, and is today evidenced in Prime Minister Modi’s reported antipathy to the “Anglicized” officer cadre and the liquor-swilling “Mess culture” in the military.

In the fin de siècle and the new millennium, however, there’s a heartening trend of retired generals (BC Khanduri, VK Singh, and lately DS Hooda) seeking a second career in domestic politics, joining parties of their choice, and braving the heat and dust of electioneering rather than whiling away their retirement years in frustrated argumentation drenched in whiskey sours. Indeed, former military veterans elevated to cabinet posts (Jaswant Singh, Khanduri, VK Singh and RS Rathore) have comported themselves in office with enormous dignity, propriety and honour, and have impacted the country’s policies.

Veterans cannot claim the armed forces suffer from the absence of military expertise and domain knowledge in the generalist civil servant-run government and turn around and deride the involvement of former uniformed personnel in politics under the rubric of “politicization”. The Indian military is a volunteer citizen force, and more soldiers, naval persons and air men joining politics, contesting polls, and rising up the political ranks is a welcome development, rendering the government progressively more sensitive to national security and armed services’ concerns.

Senior Fellow in National Security Studies at the Centre for Policy Research, New Delhi, he was Member of the (1st) National Security Advisory Board and the Nuclear Doctrine-drafting Group, and author, among other books of, 'Nuclear Weapons and Indian Security: The Realist Foundations of Strategy', 'India's Nuclear Policy' and most recently, 'Why India is Not a Great Power (Yet)'. Educated at the University of California (undergrad and grad), he was Visiting Scholar at Princeton University, University of Pennsylvania, the Shanghai Institutes of International Studies, and Henry L. Stimson Center, Washington, DC.
View all posts by Bharat Karnad →
This entry was posted in Afghanistan. Bookmark the permalink.

11 Responses to Politicization of the Indian military? Alarmist nonsense!