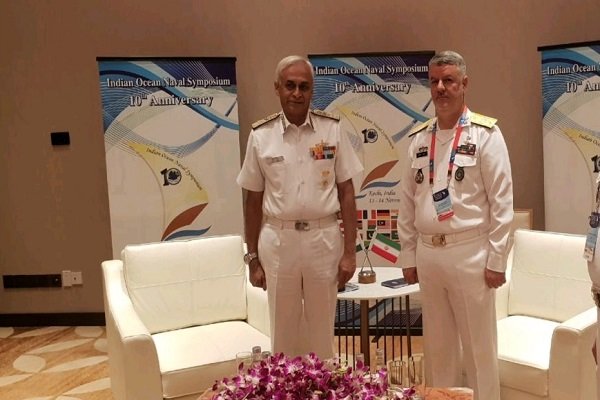 Thank God for the Indian Government showing some sense in inviting the Iran naval chief, Rear Admiral Hossain Khanzadi, to attend the 10th Indian Ocean Naval Symposium (IONS) conducted in Kochi, HQrs Southern Naval Command Nov 13-15.  Billed as a home-grown maritime initiative in the new Century that is aimed at information sharing to obtain “mutually beneficial outcomes” (per an Indian Navy press release), IONS has 36 member and observer states (Australia, Turkey, Netherlands, etc) . Given the Modi regime’s incurable desire to please Washington every which way and then some, the permission to Iran was by no means foreordained, considering Delhi seems intent on upsetting Tehran by falling in with the US policy of killing Iran’s oil economy softly with sanctions. Why else has India reduced its Iranian oil off-take by a third? So Khanzadi’s presence was a welcome departure from what was  expected.

On the other hand, the Modi government was true to form on Pakistan. Despite our immediate neighbour to the west being a charter member of the 36-member IONS, it was disinvited from the Kochi event. It led Pakistan to warn that the “precedence of selective invitations” will “erode the spirit of the forum”. This is no small matter, given that the Symposium is meant to encourage “cooperative capacity-building to deal with common security concerns” and partake of collectively helpful activities, like information sharing at the heart of the Information Fusion Centre, located in peninsular India, that the Indian Navy has been authorized to establish. Singapore has such a centre to keeps tabs on merchant ships plying the Malacca Strait and the proximal waters.

With the Indian and Singapore IFCs connected, there will be in an interlocked information grid spanning the seas from the Philippines to the arc Simonstown-Suez-Hormuz to track and mount surveillance of “white shipping” in this oceanic expanse. It could be the information/data base to instantly identify Chinese merchant vessels in the “theatre-switching strategy” — if PLA acts up on the land border, India turns the screw on Chinese naval and merchant marine in the Indian Ocean — that Delhi is enamoured by. This even though such a strategy, as I have argued, promises to be ineffectual — the reasons why have been elaborated by me in in previous posts and in much detail, particularly in my book ‘Why India is Not a Great Power (Yet)’, and won’t be repeated here.

But it is precisely the military undergirding of the IFCs that may have played on the Pakistan-induced paranoia the BJP government suffers from.  It is in line with Modi’s complaining bitterly  about the 26/11 Pakistani villains Hafeez Saeed and the LeT lot being “mainstreamed” into the Pakistan system (because they have been allowed to fight elections)  — as has by now become the Indian norm — to US Vice President, Mike Pence, on the sidelines of the Asia summit in Singapore Nov 14. In response, Pence said little that was relevant to the issue of Pakistani terrorism raised by Modi. Just how noncommittal the American VP was may be gauged from Foreign Secretary Vijay Gokhale’s statement issued after the Modi-Pence meet:  “There was some good understanding of how we can move forward in building cooperation in counter-terrorism, and both countries recognized this as a challenge we have to fight together and along with the rest of the international community.” This as, the American idiom goes, does not amount to a “hill of beans”! Likewise, Modi’s pleas on the other issue that the BJP government cries itself hoarse about — the fast-closing H1B visa channel for Indian tech coolies with his talk of India as a “treasury of talent” and of people capable of technological innovation, fell on deaf ears.

If India boasts of such huge talent and capacity for innovation, well, how about making the Indian milieu receptive to upwardly striving young engineers, scientists and doctors by removing the dead hand of the Indian government from the lives of the Indian people, Mr Modi, so that Indians can fulfill their aspirations in their own country, and you wouldn’t have to beg for consideration from Western leaders? But, of course, such thinking is not on the prime minister’s mind. In the event,  the Indian PM received not a nod in acknowledgement from Pence about the issue Delhi has been hammering away at for all of Modi’s so far 4 and half years in office.

By making so much about the supposed threat from Pakistan and thus raising that country’s stock in the world for which Islamabad should be eternally grateful, it stands to reason that with IONS gone, another opportunity to bind the countries of southern Asia into an economic whole to benefit India at the centre of it, this one to do with the TAPI (Turkmenistan-Afghanistan-Pakistan-India) gas pipeline, too will go waste.

Muhammetmyrat Amanov, the Turkmen CEO of the TAPI pipeline project recently announced to an industry conference in Dubai that it was on track, with the total cost being reduced from from $10 billion to $7 billion, with the first, foundational, stage costing only $5 billion. “We are planning”, he said, “to make a final investment decision in the first half of next year and then, stage by stage, finalize construction in Pakistan, Afghanistan and India.” He also stated that the gas would be flowing to Afghanistan by next year end and to Pakistan inside of two years. What has helped the TAPI project to be up and running is the financing secured from German agencies whose credit line will fund the purchase of the necessary capital equipment.

The question, therefore: Is the Modi government aware of any of these developments and on the same page as Mr Amanov? Oh, yes, the then minister of state MJ Akbar reiterated India’s commitment to TAPI pipeline when visiting Ashgabat in end-February this year, talking of it as a “benchmark” of regional cooperation. That’s the formal stand. Because the fact is, after the initial burst of enthusiasm, Delhi’s attitude to this energy boon, astonishingly, has been preternaturally tepid. Sure, the Indian government doubts whether, given the existing conditions, the gas will flow freely across Afghanistan and Pakistan. But then Delhi has insisted that payments for the gas will be made only on actual delivery to the Indian end of the TAPI terminal for onward distribution. Fair enough. But doesn’t Amanov’s statement suggest that the Turkmen government has worked out the arrangements for the smooth and uninterrupted flow of gas with Ghanis’s Kabul and Islamabad? So, where’s the problem and why the hesitation? Unless it is that Modi doesn’t want Pakistan to gain from the transit duties on the gas which will be a substantial sum of monies earned by Pakistan with the Asian Development Bank estimating that the TAPI pipeline will be profitable only if a minimum of  30-33 billion cubic metres of gas annually flow through it.

Meanwhile, China is waiting in the wings, ready to swoop in to buy the Turkmen gas and extend the  pipeline eastwards to grow the economy of Xinjiang,  if India falters. What are the odds that India won’t  (falter, that is)?