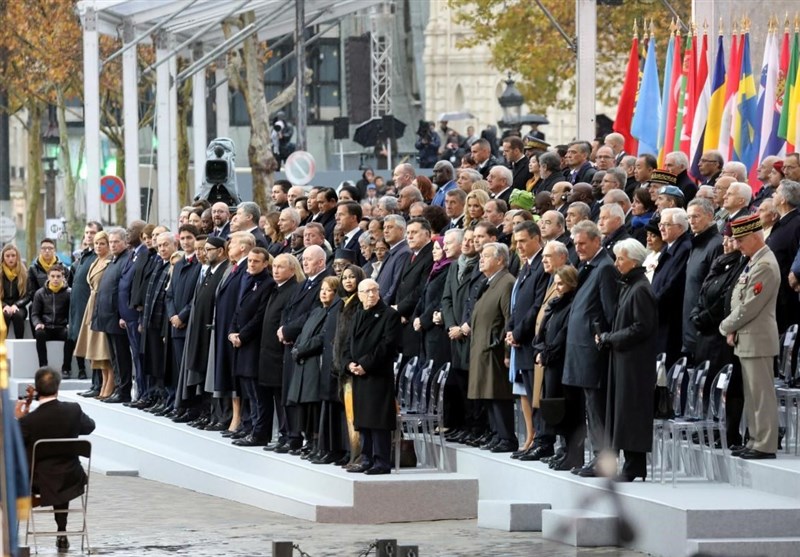 [World leaders in Paris to mark the 100th anniversary of the ending of WWI; Indian Vice President  Venkaiah Naidu and spouse can be seen in the middle of the second line from front]

The sombre marking of the 100th anniversary of World War One in Paris Nov 11 by world leaders has several hard lessons for India, but the Narendra Modi government seems too inattentive to learn them. The first lesson is not to fight a foreign power’s (read in 21st Century Asia US’) battles, become cannon fodder in its military ventures (as signing the foundational accords puts them on the way to becoming), as Indian troops who disembarked on Europe’s shores in September 1915 as part of Field Marshal Douglas Haig’s 1st Army in France and Belgium, were.

In the lead-up to the event, French President Emmanuel Macron harked to the context set by US President Donald Trump’s ‘America First’ policy that conspicuously distanced the US from its traditional; NATO allies by reiterating his call for a “true European army”. He explained that “When I see [Trump] announcing that he’s quitting a major disarmament treaty [the Intermediate Nuclear Forces Treaty signed in the 1980s after the so-called “Euro-missile crisis”] who is the main victim? Europe and its security. We have to protect ourselves with respect to China, Russia and even the United States of America. We need a Europe which defends itself better alone, without just depending on the United States, in a more sovereign manner.”  ]. Trump twittered  in response that Macron’s view was “Very insulting” before rounding in on his controversial policy saying “but perhaps Europe should first pay its fair share of NATO, which the US subsidizes greatly!”  See  https://www.politico.com/story/2018/11/09/trump-macron-european-army-paris-981759

Not to be easily bullied, Macron elaborated his position to Fareed Zakaria in a Nov 11 CNN interview.  Trump, he said, “is in favor of a better burden-sharing within NATO.” And added “I agree with that. And I think that in order to have a better burden-sharing, all of us do need more Europe. And I think the big mistake — to be very direct with you — what I don’t want to see is European countries increasing the budget in defense in order to buy Americans’ and other arms or materials coming from your industry. I think if we increase our budget, it’s to have to build our autonomy and to become an actual sovereign power.”

The case that armaments self-sufficiency epitomizes national sovereignty has been repeatedly made in my last two books — ‘Why India is Not a Great Power (Yet)’ and the recent ‘Staggering Forward: Narendra Modi and India’s Global Ambition’. But such a clear linkage has not been publicly made by any world leader until now by Macron, because the international discourse until everything began going wrong was the myth of “geoeconomics” and “interdependence”. Of course, in conceptualizing an European military force independent of the US and NATO, Macron obviously hopes European countries will contract for military hardware and services from Dassault Avions, MBD, DCNS, Thales, SNECMA, et al and keep the flagging French defence industry from going under. But the larger theme he highlighted that European sovereignty isn’t served by buying American military equipment and enriching the US defence industry — which is what Trump would have NATO member states do, holds.

It is the longtime NATO-European malady of relying on the US and American arms that Macron has urged resistance against, now afflicts India and its government in trumps. As the military indigenisation group active on the net, SITARA, headed by a former Ambassador to Switzerland, Smita Purshottam, has pointed out, in closed councils even DRDO scientists and engineers tasked with making the country self-sufficient in arms,  smirk any time any one brings up the issue of stopping imports and going in for full indigenous development of major military hardware which the Indian private sector is entirely capable of,  used as they are  to taking the easy way out: Importing technologies, assemblies, sub-assemblies, and sub-systems from diverse sources, “integrating” them, producing something, and calling this a huge advance on the path to self-reliance in arms! It is in the vested interest of the Indian political class, the despair-inducing state bureaucracy, and the be-medaled flag-rank uniformed brass to swallow such nonsense whole. They are so inclined because how else are Western residential visas, work visas, and “scholarships” to be secured for progeny, shopping sprees in New York, Los Angeles, Paris, London, Stockholm, and Rome by families of those inside and outside the defence procurement loop to be financed, and the health of the performance, productivity, and technology ingestion-wise dismal socialist era defence public sector units (DPSUs) to be assured? No surprise then that Modi’s much trumpeted ‘Make in India’ policy exactly fits the GOI-MOD-Finance Ministry-DPSU way of doing things — screwdrivering stuff from imported kits, and passing it off as ‘Made in India’ when genuine  MADE IN INDIA requires that all research, and the process of designing, developing and producing armaments be carried out by Indians in Indian firms in India.

It is only then that Modi or any other the PM of the day will be able to credibly claim for India the status of security provider to, at a minimum, countries in the Indian Ocean basin and Southeast Asia.

With respect to providing security this is what Macron also said: “What Europe needs is to build its own capacities and its autonomy in order to protect itself. That’s why I do want to build more solidarity within Europe. And I think it’s very important because if you want to build an actual Europe, if you want to reinforce the homogeneity and the strength of our Europe, you have to convey the message to people in Hungary, in Poland, in Finland and in very different places, that the day they have an issue, the day they are attacked, Europe is the one to protect them, and not another power.”

In an alternative reality, were India really sovereign and boasted only home-designed and built weaponry, it’d be standout nation that even distant states would consider a go-to friend and partner, and an Indian Prime Minister would then be able to restate the above Macron statement but with India replacing Europe, and South Asian neighbours, Gulf countries, the East African littoral, and Southeast Asian states replacing Hungary, Poland and Finland, with this entire group of vulnerable Asian nations asking for Indian protection and security assistance against a rampaging China rather than calling in extra-regional entities such as the US for help.

The other thing that was on notice in Paris was the not so subtle display of change in the rank ordering of countries. Even as the phalanx of invited world leaders (Naidu included) stood at their assigned positions to salute the “unknown fallen” in war, Trump kept all waiting. The US President finally made a late appearance only to be upstaged by the Russian President Vladimir Putin, who strolled in last and was ceremonially escorted to the frontline of the podium. And unlike Trump, he was not snubbed or rebuked by Western European leaders, or upbraided by the host, indeed Macron made it a point in the Zakaria interview to implicitly elevate Russia, along with China, as the threat that a European-armed “real European army” would defend European states against.

The reason Putin strutted onto the stage is not hard to see. The Russian military has just  conducted a couple of the largest war exercises in recent times — ‘Vostok 2018’ and ‘East 2018’. These involved 300,000 troops (including, incidentally,  35,000 PLA troops), 36,000 tanks and other armoured vehicles, 1000 combat aircraft, helicopters and drones and 80 warships and ancillaries in, what Russian defence minister Sergei Shoigu called, “conditions as close to a combat situation as possible.” NATO was quick to condemn these war games as demonstrating “Russia’s focus on exercising large-scale conflict”. But that was just the message Putin wanted to drive home, that he can intervene in Syria or anywhere else, do another Crimea in eastern Ukraine or whatever else he pleases, and US and NATO can do squat about it.

This is Putin’s Russia our low-sighted, strategically blind, America-besotted, Modi government, which instead of reassuring Moscow by reaffirming India’s strategic autonomy,  has set out to alienate by following through on a tilt-policy set in motion during Vajpayee’s days, which gathered momentum during the Manmohan Singh decade, and is reaching its culmination under Modi. It has India jumping into bed with US led by Trump and his henchmen — Bolton, Pompeo, confidence in whom , Macron says, Europe has lost.

2 Responses to Armaments and sovereignty