The Hindu’s review of ‘Staggering Forward’

Posted on September 9, 2018 by Bharat Karnad 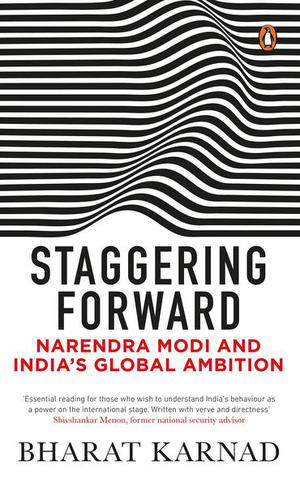 An examination of India’s diplomacy finds it wanting on many counts, from Pakistan to tackling ‘blind-spots’ like the U.S. and China

Books on Prime Minister Narendra Modi’s foreign policy have one thing in common: they come too soon. In order to judge the efficacy of any policy it requires more than the four years that the Prime Minister has occupied his position. One needs to put some distance between NDA-II’s tenure and present times in order to distinguish what was driven by policy and what is simply a reaction to a set of events.

Was the decision not to have talks with Pakistan a policy, for example? If so, why did the PM visit Lahore? If calling off talks was linked to acts of terrorism, then why were Foreign Secretary level talks scheduled in August 2014 cancelled over a meeting the Pakistan High Commissioner had with the Hurriyat? Similarly, if “Neighbourhood First” is a policy, what must one make of the 2015 blockade of Nepal, or the fact that outlays for all SAARC neighbours (with the exception of the Maldives) were actually lower in 2018 than they were in 2013? If stated goals are a parameter of policy, then how should one grade Modi on his twin-ambitions for the UN Security Council and the Nuclear Suppliers Group memberships? Finally, how does one judge success with the great powers as distinct from the past in such a time span: U.S., Russia and China, when each comes with its own legacy and historical baggage of ties over 70 years? Ironically, the area of Modi’s foreign relations that are seen as his best success, i.e. with West Asia, is not even defined as a considered policy by most.

Nevertheless bookstores abound with volumes on Modi’s foreign policy, including The Modi Doctrine: New Paradigms in India’s Foreign Policy (Ganguly & Chauthaiwale), Modi Doctrine: The Foreign Policy of India’s Prime Minister(Sreeram Chaulia), Modi’s World (C. Rajamohan), Modi’s Foreign Policy(Tremblay & Kapur), and Modi’s Midas Touch in Foreign Policy (Surendra Kumar). Many are simply hagiographies, written by admirers of the Prime Minister, and most are by adherents to a ‘muscular’ India that shows its ‘red eyes’ to adversaries, and takes its rightful place on the world stage beside other great powers. Criticism of Modi’s foreign policy, thus far, has been derided as the work of ‘weak-spirited peaceniks’, ‘Cold war relics’ or ‘champions of non-alignment’ (which is now a discarded policy).

The latest book on this shelf, Bharat Karnad’s Staggering Forward: Narendra Modi and India’s Global Ambition, is however, different for a number of reasons. To begin with, Karnad, who describes himself as a conservative strategist, is very much an adherent to the ‘muscular India’ policy. Long before Modi burst on the national scene, Karnad advocated staring down China, using force with neighbours who didn’t come to heel, and argued against India’s self-imposed moratorium on nuclear testing. In his introduction, Karnad claims primary ownership of the “India First” concept since 2002, which became a commonly used phrase during Modi’s 2014 campaign. He also admits to having been disappointed by Modi’s foreign policy in practice, particularly on three counts: what Karnad sees as supplication to the United States, appeasement of China to the detriment of India’s influence in its neighbourhood, and a lack of respect for India’s strategic integrity including an over-yielding nuclear posture. “Candidate Modi roared like a tiger, as Prime Minister he has been a purring kitten when dealing with big cats,” writes Karnad, comparing Modi’s actions to “uncoiling his ruthlessness only against a weak and enervated Pakistan, and his domestic political opponents on the other.” The sentiment is startling because the author is otherwise himself a proponent of harsh measures against Pakistan’s military.

Staggering Forward… is its most incisive, even brutal, in its discussion of Prime Minister Modi’s style of diplomacy, with a chapter devoted to the ‘Impact of Modi’s Persona on Government’. While conceding that Modi’s “unselfconscious hugging” of world leaders is a “diplomatic innovation”, only possible because of his personal confidence levels, Karnad believes Modi’s “narcissistic” belief in a “God-given gift (Modi’s words)” to understand the world around him has reduced most officers of the Ministry of External Affairs to “glorified peons”. He also accuses the PM of conflating good personal ties with world leaders with an idea that they will be guided by India’s interests instead of the country they represent. Throughout the book, Karnad is clear that Indian foreign policy must tackle its two “blind-spots”: U.S. and China, and among the solutions he propounds are the ouster of the U.S. from the Quadrilateral (a ‘Mod-Quad’ with Australia, Japan and ASEAN) and the ouster of China from BRICS (BRIS).

The book is remarkably up-to-date, and discusses events through to the middle of 2018. Karnad even weighs in on the COMCASA agreement that was signed during the Pompeo visit this week. Two chapters focus on the task ahead for both military modernisation as well as defence procurement, with a detailed critique of the Modi government’s Make in India policy. The book is intense reading, with the prose clearly flowing from the angry pen of an author upset with every aspect of the direction India has “staggered forward” in. If it upsets the PM and his admirers, they can take comfort from the fact that it judges his predecessors even more harshly.

[Published in The Hindu, Sept 8, 2018, at  https://www.thehindu.com/books/books-reviews/staggering-forward-narendra-modi-and-indias-global-ambition-review-foreign-policy-in-a-hurry/article24893081.ece

5 Responses to The Hindu’s review of ‘Staggering Forward’