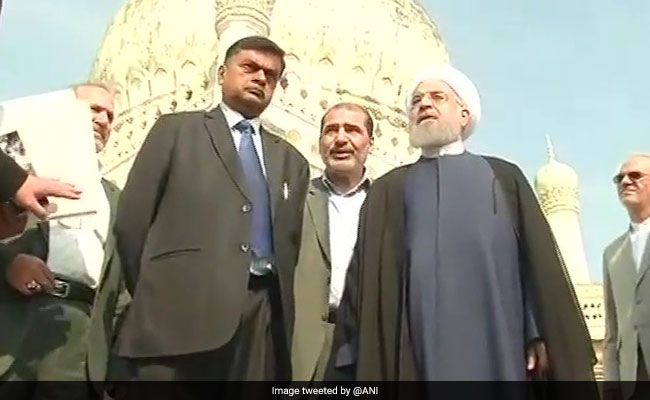 (Rouhani at a Hyderabad mosque)

As I write this, Iran President Hassan Rouhani is sitting down to talk with Prime Minister Narendra Modi. The latter can firm up bilateral relations in a way that hasn’t been done before in that the stake is now immeasurably strategic. Having shown tremendous strategic nous in getting Oman and Muscat on India’s side, something the Sultan Qaboos regime has been sending out feelers for, for more than a decade, and getting Duqm as a prized Indian military base in the Gulf, Modi now has the opportunity for sealing the country’s presence in that region — and maritime-wise outflanking China out of Gwadar at one end and Djibouti at the other end. Duqm, built up by the US military, is an alternative (to Bahrain)  forward headquarters of the US Fifth Fleet.

Rouhani has made clear what Tehran is putting on the table — permission for Indian investment in the rich Farzad-B gas field in southern Iran, Chahbahar as the Indian entrepot to the hinterland of Central Asia bypassing Pakistan, and a regime that will allow Indian investment in that country in rupees — in a sense monetarily extending India’s reach to the Gulf. With respect to Chahbahar, Modi needs to formalize — even if in a secret provision — not so far there — in the draft agreement on the table, the Indian military’s use of this port as an Indian naval base to preposition its stores. This is an imperative because in the regional chessboard a worried Pakistan military has revived its old association with Saudi Arabia by posting  a Pakistan Army contingent in Riyadh.

What does Rouhani expect in return? Tehran will very much appreciate a two-way economic-trade-investment milieu entirely insulated from the arbitrariness of the US policy towards Iran. Washington has tried to corral the lot of proximal Asian states to fall in line with the US policy of pressuring the shia clerics-run Iran. Most Gulf states being sunni, their religio-ideological interests adhere to American posture. But not so India, with the second largest shia population in the world (and nearly 20% of the almost 200 milllion strong Indian Muslim community) and in the thick of the sunni-shia contestation in the extended region. Indeed, one of the largest en bloc supporters of the ruling BJP are the Indian shia voters. Delhi can no more afford to alienate Tehran and the theocrats of Qom than it can upset the sunni world. So while Modi’s “balancing” act between Israel and Iran is a matter of traipsing along the sidelines because India’s policies to these two countries are on different tracks, avoiding the US call to Delhi to bandwagon with it against Iran is centrally injurious of the Indian national interest, and cannot be tolerated.

It is here that Modi will have to show strong conviction and communicate to Trump and Washington that it will be no part of any concerted Western-Arab sunni moves to inconvenience Iran, because it cannot afford to, that too much rests  on good relations with Tehran for any Indian government to risk losing a friendly country historically close to India. And that if, in extremis, India is asked which side it is on — the US should be told in no uncertain terms that the Indian government is on the side of India. For too long — almost 30 years now — Delhi has prosecuted relations with Tehran with an eye cocked to Washington. This is not necessary any more.

India has humungous leverage where the US is concerned — economic in terms of access to the largest free market in the world, and strategic in terms of size and location and formidable, if largely unimaginative, military forces, and the clear message that the US cannot do without a friendly India if it means to counter China. It is leverage that mousy Indian governments to-date haven’t used. Time Modi did.

India is pivotal, in a curious way, for both Iran and the US. Rouhani’s Iran recognizes this; Trump’s America doesn’t.