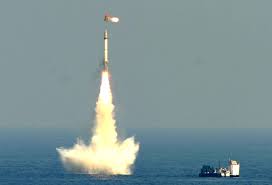 The Aridhaman too is an Arihant-class boat but with more onboard firepower — 8 vertical launch tubes for the 1,500 km range K-15 and 2,500km range K-4 Mk-1 (seaborne Agni-III) missiles  — with the 5,000km range K-5 Mk-II (seaborne Agni-V) missile under development but coming up fast. The weapon mix will of course be determined by the aim of the nuclear counter-strike mission. In comparison, Arihant carries, besides the K-15, also the K-4 — but has available only 4 missile silos aft of the conning tower.

In fact, the Indian Arihant-class SSBN seems far larger and more powerful than advertised by the government or the navy. It looks like the Arihant displaces some 8,000 tonnes as against its publicized tonnage of 6,000 tonnes. The follow-on sub — Aridhaman and the two other SSBNs in this class are larger still.

Naturally, this sort of tonnage cannot be pushed by a relatively  puny 90MW miniaturized light water reactor. Matching the displacement with the power plant would put the latter at anywhere between 120MW-150MW for the Arihant, and nearer to 200MW for the Aridhaman.

The SSBN would not have been possible — it must be gratefully admitted, without seminal help and assistance from Russia, which has been surprisingly forthcoming in parting with strategic technologies. Those in the Indian military enamoured of Western tech and imports, should sit down and enumerate what technologies the three armed services have actually received from the US and France before they begin yapping incessantly about the so-called mil high-tech Western countries supply and are prepared to part with in the future. If anybody in the GOI/MOD/armed services are even a little honest they will realize that the sole aim of Western govts and arms industries is to sell gullible 2nd rate states 2nd rate equipment dressed up with lots of bells and whistles to impress the yokels. And then the most critical tech will NOT be offered other than as “black box” technologies (even for the antiquated F-16!) . If it is anywhere near cutting edge hardware, such as the electro-magnetic aircraft launch system for carriers, it is made accessible to India only because their own services are finding it hard to absorb, cost-wise, and the govts and companies need a foreign buyer to amortize their R&D investments and to reduce the unit cost for their own militaries.

The EMALS on the USS Gerald Ford nuclear-powered aircraft carrier, for instance, costs the American Navy $3 billion. General Dynamics wants upwards of $5-$6 billion for each EMALS unit sold to, yea, the sucker primero — India. This while Washington has made it plain that the deal for it will not come with the nuclear reactor (required to generate the enormous power to needed to drive the EMALS) the Indian naval brass desperately desired. The alternative — EMALS with several GE LM 2500 gas turbine power packs, makes little sense.

As it is, aircraft carriers are dead in the water with supersonic cruise missiles such as the Brahmos. With hypersonic weapons coming soon large ships will become all the more vulnerable and, by and by, extinct. Not that any of this will deter the naval aviation types — most of them not surprisingly graduates of the US Naval War College. Except the US Navy with a ship strength of 370 bottoms and rising deploys as escort flotilla a minimum of 5-7 frigates/missile destroyers and 1-2 submarines pulling picket duty for each of its 11 carriers. Translate that into IN terms, and most of the capital ships will be not out there asserting presence, showing flag, doing sea control but protecting the carriers. Should MOD/GOI approve 3 aircraft carriers, it will mean 15-21 surface combatants and 3 or more subs pulling police duty for the carriers out of a strength of some 50 odd fighting ships and 20 submersibles (by 2025). It will be a bit like the hordes of police and NSG protecting our VVIP netas even as there are no police to spare for their main role — of keeping criminals off our streets and our throats. Moreover, carriers are impressive in peace time; in war they are, what, sitting ducks?