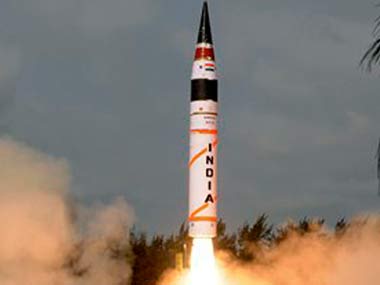 (Agni-5 launch)
The latest edition of the Carnegie Nuclear Policy Conference in Washington that just ended featured American and foreign nuclear specialists chasing, as usual, the elusive nuclear catastrophe they are convinced is round the corner. There was also the obligatory alarm raised about South Asia. This year, the India-Pakistan “nuclear flashpoint” thesis was tweaked to claim that India has abandoned its No First Use (NFU) commitment and adopted a strategy, in case of an “imminent” launch, of a pre-emptive “comprehensive strike” against Pakistan. Such a course is being contemplated, it was argued, to spare the country the “iterative tit-for-tat exchanges” and prevent the “destruction” of Indian cities.This hair-raising conclusion was not supported by other than extremely flimsy evidence — three unrelated statements by separate persons. Let’s examine and contextualise these statements in turn. The erstwhile defence minister Manohar Parrikar stated not long after taking office that India would “not declare one way or another” if it would use or not use nuclear weapons first. This was said expressly to inject ambiguity of response that is crucial for the credibility of the Indian nuclear posture. This credibility was lost in 1999 when the previous BJP government of Atal Bihari Vajpayee mindlessly made the draft-nuclear doctrine public, and later compounded the problem by replacing “proportional response” in the draft with “massive retaliation”. Incidentally, Parrikar’s avowal was in light of Prime Minister Narendra Modi’s political decision to not initiate a formal revision of the doctrine promised by the ruling party in its 2014 election manifesto.
The second reference is to the former national security adviser (NSA) Shivshankar Menon’s observation in his recent book that the Indian nuclear strategy has “far greater flexibility than it gets credit for”. The doctrine drafters in the first National Security Advisory Board (NSAB) intended and so shaped the doctrine, especially Section 4, to make it “elastic”, to enable escaping the limitations of “minimum” deterrence imposed by the prime minister in his suo moto statement to Parliament on May 28, 1998, before the constitution of the NSAB. The NFU declaration makes for fine rhetoric, distancing India from the hair-trigger situation Pakistan strives for the world to believe exists in the subcontinent. It is in Pakistan’s interest to talk up Hindu animus and predatory India, because it justifies not just its nuclear arsenal but its emphasis on first use of tactical nuclear weapons. In the event, treating NFU as a conditional constraint is what Menon hints at.

The third piece of proof trotted out is the views of retired Lieutenant General BS Nagal, a former strategic forces command (SFC) commander, particularly his view that a democratically-elected government cannot morally risk the decimation of the Indian people by sticking literally to the NFU pledge. It was during Nagal’s tenure at the SFC, it may be recalled, when the then NSA MK Narayanan publicly revealed that the military was not in the know of nuclear arsenal details and, by implication, that the SFC was not in the nuclear loop. It may therefore be safely deduced that the views Nagal has developed was outside the SFC ambit.

However, certain developments in the nuclear weapons sphere do indeed make possible an Indian first strike. Such as the ongoing process of canisterising Agni missiles, including presumably the 700-km range Agni I meant for the Pakistan and Tibet-Chengdu contingencies. It, in fact, provides the country not only with a capability for launch-on-warning but also for striking pre-emptively should reliable intelligence reveal an adversary’s decision to mount a surprise attack.

Nuclear missiles in hermetically sealed canisters are ready-to-fire weapons and signal an instantaneous retaliatory punch to strongly deter nuclear adventurism. Thus, all nuclear weapon states keep a part of their strategic forces in ready state, there being no guarantees that a confrontation or conflict with another nuclear power will keep to a sub-nuclear script. Having the wherewithal for pre-emptive action and launch-on-warning then is only a reasonable precaution.

Whatever their capabilities to fight nuclear wars, the chances of either India or Pakistan initiating a nuclear exchange for any reason are remote for the very good reason that western governments and analysts rarely acknowledge, because most of them are unaware or wilfully ignore the social context of India-Pakistan tensions, namely, the fact, whether anybody likes it or not, of these South Asian countries being organically linked.

Published in the Hindustan Times, March 31, 2017 with the title “Chances of India-Pakistan nuke war are remote”  and in the newspaper’s online edition with the title “Concerns about an India-Pakistan nuclear war are highly exaggerated” at http://www.hindustantimes.com/analysis/concerns-about-an-india-pakistan-nuclear-war-are-highly-exaggerated/story-rnKGeo3qZ0oCpMhR1edRqL.